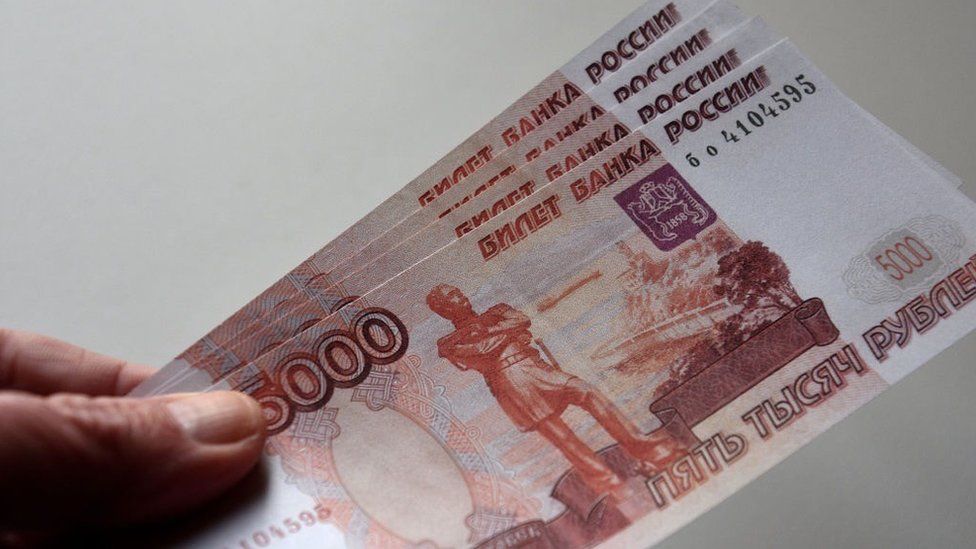 Russia will soon be unable to pay its debts, according to a leading credit ratings agency.

Fitch Ratings downgraded its view of the country's government debt, warning a default is "imminent".

The move comes amid increasing international sanctions against Russia following its invasion of Ukraine.

A credit rating is intended to help investors understand the level of risk they face in buying a country's debt - or bonds.

A low rating means the chances of not getting repaid is considered to be high - and so an investor will charge more to lend to that country.

This week, Moscow itself said its bond payments may be affected by sanctions.

The ratings cut - to C from B - is the second time this month Fitch has downgraded its view of Russia's ability to pay its debts.

"This rating action follows our downgrade... on 2 March, and developments since then have, in our view, further undermined Russia's willingness to service government debt," the agency said.

"The further ratcheting up of sanctions, and proposals that could limit trade in energy, increase the probability of a policy response by Russia that includes at least selective non-payment of its sovereign debt obligations," it added.

The announcement from Fitch came after the US and UK said they will ban Russian oil, as they step up the economic response to the invasion of Ukraine.

Meanwhile, the European Union said it will end its reliance on Russian gas.

As a major exporter of energy, the measures are aimed to hit Moscow's finances, although experts warn this is also likely to send the price of oil and natural gas higher on global markets.

On Sunday, Moscow told investors that it would continue to service its sovereign debt.

However, it warned that international sanctions imposed on its energy industry could limit its ability and willingness to meet its obligations.

"The actual possibility of making such payments to non-residents will depend on the limiting measures introduced by foreign states in relation to the Russian Federation," the finance ministry said in a statement.

It means the country's sovereign debt is now considered to be below investment grade, or in "junk" territory, by three of the world's major ratings companies.

SP said its move followed measures it believed would "substantially increase the risk of default".

"It will only service it in much depreciated roubles anyway and foreign investors are offloading it at fire sale prices. Fortunately the global exposure to it is relatively low," he told the BBC.

The Russian rouble has also hit record lows as countries around the world imposed increasingly tough sanctions on the country.

Last month, Russia's central bank more than doubled its interest rate to 20% in an attempt to stop the value of its currency from sliding further.

Dozens of global brands - including McDonald's, Coca-Cola and Starbucks - have halted business in Russia due to the invasion of Ukraine.

Watch: US bans all Russian oil and gas imports