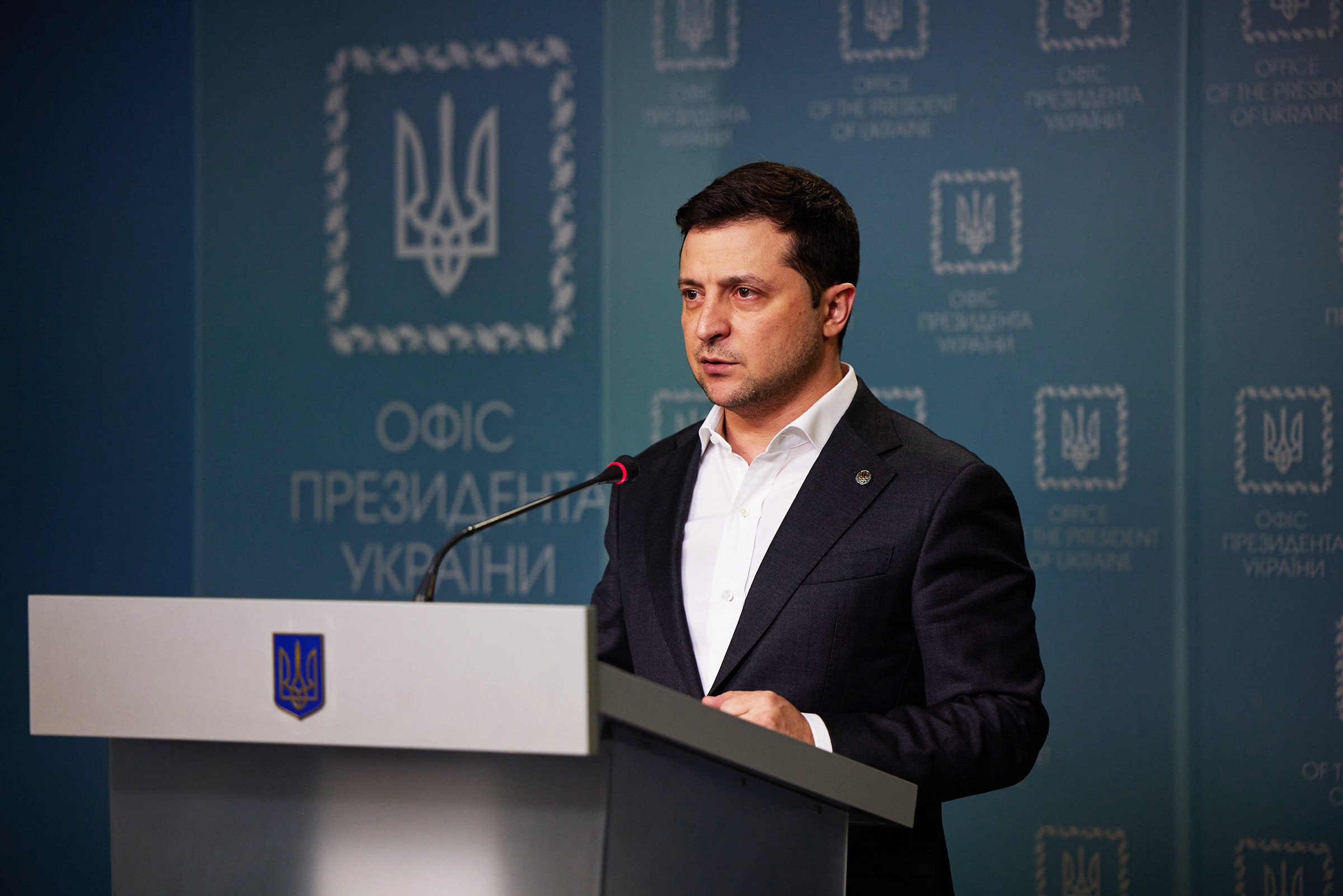 Volodymyr Zelensky Is Not a Meme

Ukrainian president Volodymyr Zelensky’s family photo keeps appearing in my social media feeds. Perhaps you’ve seen it, too. The picture shows the politician alongside his wife and daughter, holding his son in his lap. Father and son grin, wearing superhero facepaint. It is a happy moment. This photo is captioned with a snippet of Zelensky’s inauguration speech from 2019: “I do not want my picture in your offices. The president is not an icon, an idol or a portrait. Hang your kids' photos instead, and look at them each time you are making a decision.”

As Ukraine continues to fight against Russia’s invasion, its 44-year-old president has transformed into a beloved wartime leader. As such, this isn’t the only Zelensky imagery going viral right now. There’s also a front-facing video he made with his cabinet members as they hunkered down in Kyiv, as well as photos of him dressed for combat. His quip turning down an evacuation offer from the United States (“I need ammunition, not a ride”) is already emblazoned on shirts, mugs, and flags for purchase on Etsy. Admirers are photoshopping his head onto Captain America, professing to have raging crushes on him, and creating “fan cam” video collages as digital tributes. Zelensky is the number-one target of the country with the most nukes in the world, and he’s not backing down—if there was ever a time to idolize a political figure, it might be this moment.

But politicians aren’t meant to be idolized, even in their finest hours. That was, in fact, the point excerpted from Zelensky’s speech. And there is a difference between admiring a leader’s actions and adulating them like a K-pop star. Believing that the Russian invasion of Ukraine is an atrocity and that Zelensky is behaving courageously does not mean that it’s wise to apply the googly-eyed logic of fandom to his actions. In fact, it’s distinctly unwise. Treating Zelensky like a superhero—call it Marvelization—recasts a geopolitical conflict in which real people are really dying into entertainment, into content. As Russia bombed Kyiv, the New York Post published an article about who might play Zelensky in the inevitable film adaptation of the conflict. (The consensus? Avengers actor Jeremy Renner.)

Who does this help, exactly? The same people who benefitted from canonizing former Supreme Court justice Ruth Bader Ginsburg as “the Notorious RBG,” I suppose: nobody. Despite her exaltation, when Ginsburg died, she was replaced by a woman who is in every way her ideological foe. When certain segments of the liberal crowd in the United States treated the Robert Mueller investigation as a hero-studded spectacle, buying T-shirts with the former special counsel’s face on them and calling former FBI director James Comey “daddy,” it didn’t negatively impact the Trump administration. If anything, this behavior helped Trump, who was always keen to portray his opponents as government elites. (Not that Trump didn’t encourage his own stans—he gave them iconic merch in the form of MAGA hats.) Fan culture has, as critic Amanda Hess pointed out back in 2019, already swallowed American democracy. We’re worse off for it. Political figures are treated as a different flavor of celebrity, rather than as public servants. They have fanbases who give themselves names— Kamala Harris has the #KHive, for example, while former New York governor Andrew Cuomo had, unfortunately for everyone, the “Cuomosexuals”—and who see their affinity for their chosen politician as an extension of their identity. With Zelensky, the fandom sprouting up around him in the United States is especially dispiriting because the circumstances he is in are so relentlessly grim. It feels cruel to put the idea of Zelensky on a pedestal when the flesh-and-blood man is begging for help on the ground.

Zelensky, who played the Ukrainian president on television before he was elected, is an inherently likable figure. He won the Ukrainian version of Dancing With the Stars. He voiced Paddington Bear in the Ukrainian version of Paddington Bear. He played “Hava Nagila” with his penis on a piano in front of a live audience. Typing all of this out makes me like him more than I already do, even as I’m sitting here writing about why it’s a mistake to mythologize politicians in this particular way. In this moment of true emergency, Ukraine has benefitted from Zelensky’s talent for endearing himself to audiences, after all. He has rallied international allies to aid Ukraine by effectively communicating his country’s plight with rousing speeches.

Still, onlookers who eagerly treat Zelensky like the latest action-movie star are not doing him any favors. “What we see in studying memes and politics is that while memification helps a political message or cause spread to many people, it often comes at the expense of a flattening of that story,” says Sulafa Zidani, a Massachusetts Institute of Technology professor specializing in digital culture studies. What’s the harm, one might ask, in viewing Ukraine as the Rebel Alliance and Russian president Vladimir Putin as Emperor Palpatine? Well, for starters, Zelensky is a person, not a Jedi. He doesn’t have magical powers. Thrusting an actual person into the role of Cinematic Savior is wildly unfair. Plus, Putin rules a country filled with actual human beings, many who are putting themselves at risk to protest this invasion. It also reduces Ukraine’s plight to something for people in NATO nations to pause over while looking at their phones, sighing sadly, maybe wiping away a few tears like they did at the end of Avengers: Endgame. Maybe, as Zelensky warned them not to do, they’ll admire his portrait. And then they’ll keep scrolling.