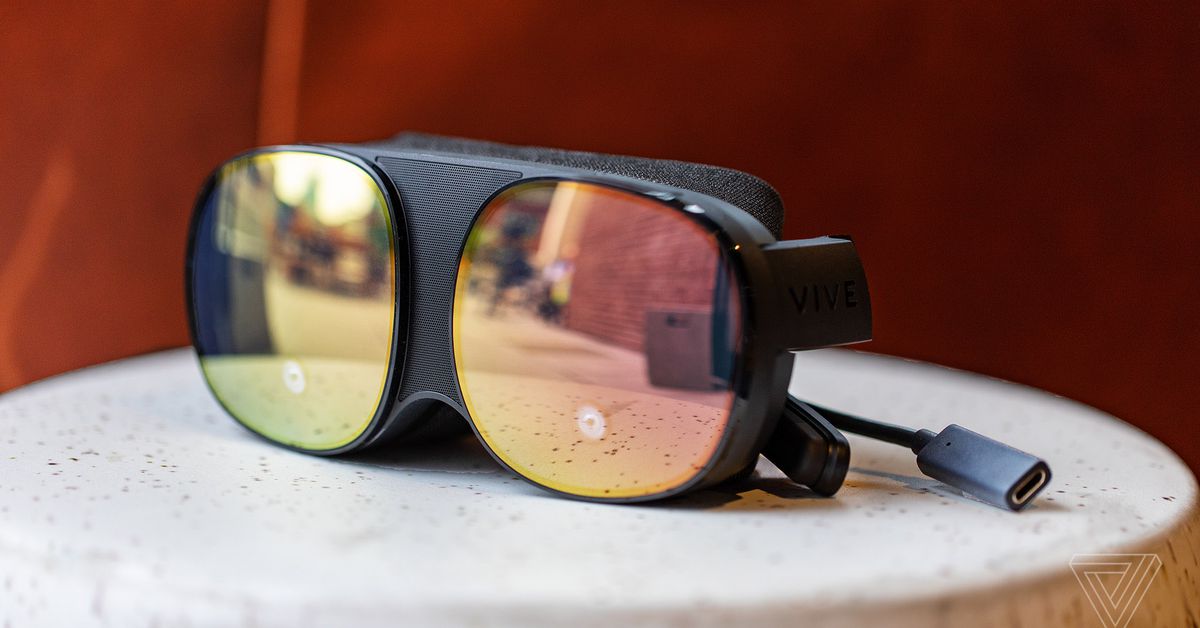 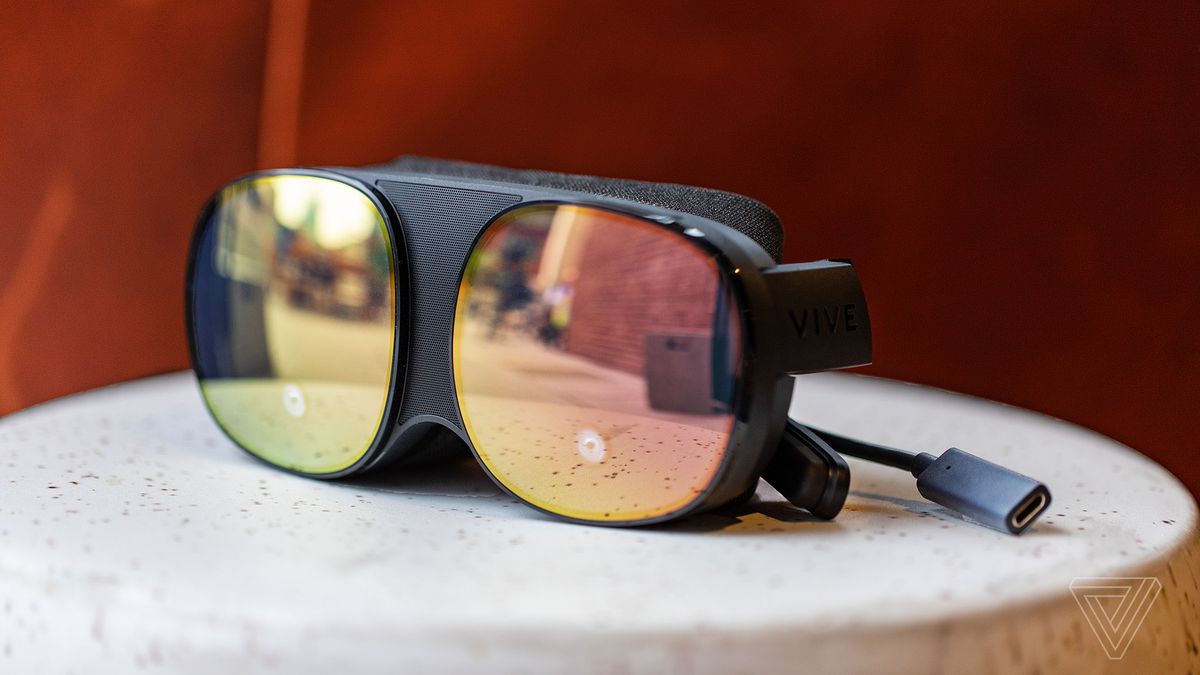 HTC wants to find a new VR market — but what is it?

After After years of focusing on business-oriented virtual reality, HTC is launching a $499 entertainment-focused headset called the Vive Flow in November, with preorders starting globally today.

The new Vive Flow looks radically different from most HTC Vive devices. It’s a standalone piece of hardware modeled after a pair of sunglasses, and at first glance it could pass for an augmented reality headset, not just a VR one. But behind those slightly bug-eyed mirror shades, you’ll find a lighter version of earlier Vive headsets — minus some major features. 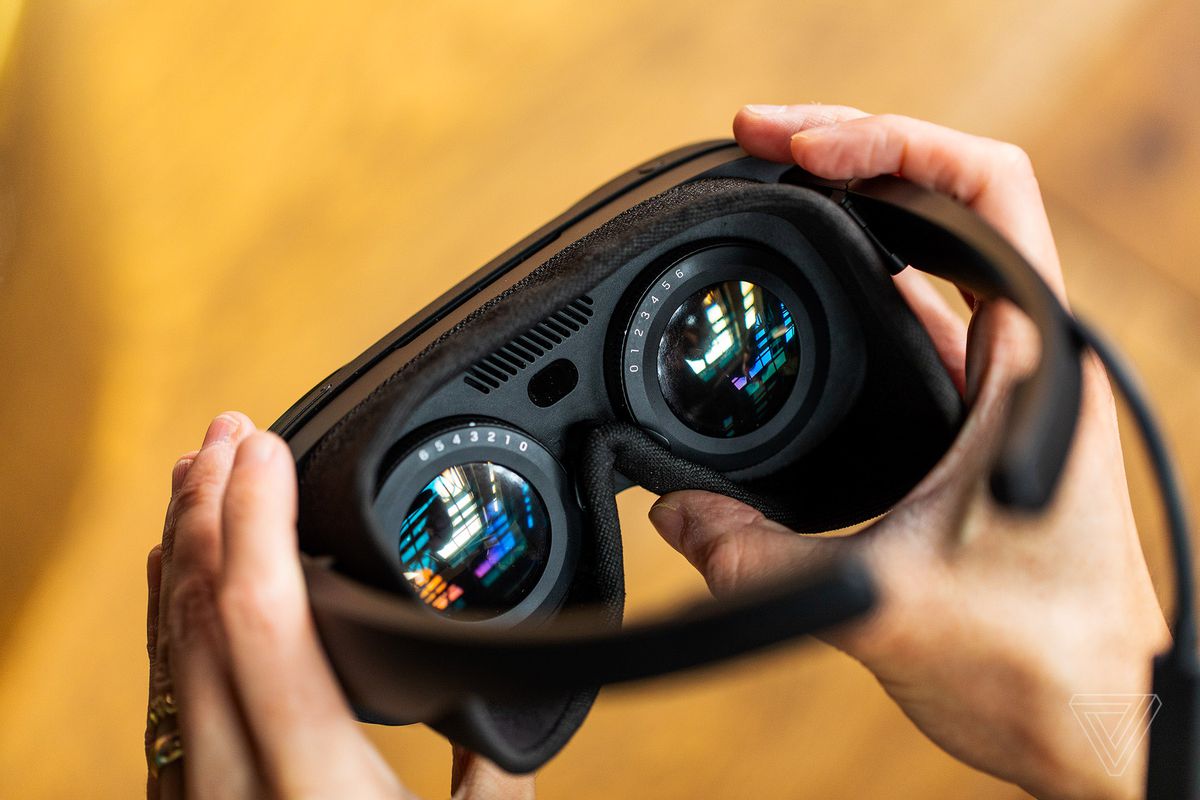 The Vive Flow features focus dials on the inside of the headset.

The Vive Flow, which was leaked heavily before HTC’s reveal today, is a compromise between capability and approachability. The device has a 1.6K-per-eye display (HTC didn’t provide the exact resolution) with a 100-degree field of view at a 75Hz refresh rate. That’s a little more limited than the 120 degrees and 90Hz rate that you’ll find on the more costly Vive Focus 3 and roughly the same refresh rate but a lower field of view than the original Quest. It’s also slightly comparable to the Oculus Quest’s refresh rate before a recent upgrade and a little more cramped than its 110-degree field of view.

Two front-facing cameras handle inside-out motion tracking, and HTC plans to support hand tracking as well, although the feature wasn’t available during a pre-launch demo and didn’t give an exact timeline for its rollout. It’s using the last-generation Qualcomm XR1 chipset (as opposed to the Quest 2’s XR2), and it’s got a respectable 64GB of storage space but — unlike the Focus 3 — no slot for an expansion card.

Lightweight hardware is a big selling point for HTC. “We wanted to get to something lighter, more wearable, easier to travel with,” says Dan O’Brien, HTC’s head of VR. The Flow weighs 189 grams, compared to around 500 grams for the Oculus Quest 2, and has a hinged design that folds up to fit in a $49 carrying case. Unlike earlier Vive headsets, the Vive Flow won’t come with a controller. Instead, you connect the headset wirelessly to an Android smartphone and use the phone as a combination remote / touchpad. Similar to the mobile Google Daydream or Samsung Gear VR remotes, it’s basically a virtual laser pointer with buttons for selecting items and calling up the homescreen.

Leaked photos showed the Flow plugged into a black box, which some people speculated might be an external computing device. It’s actually a $79 battery pack that should let you use the headset for four to five hours. The Flow technically has its own battery, but HTC says it only lasts a few minutes — it’s designed to let you swap power sources without turning off the headset. So you’ll need either the HTC battery, which is sold separately from the headset, or (according to HTC) any 10,000mAh power bank and a USB-C cable. 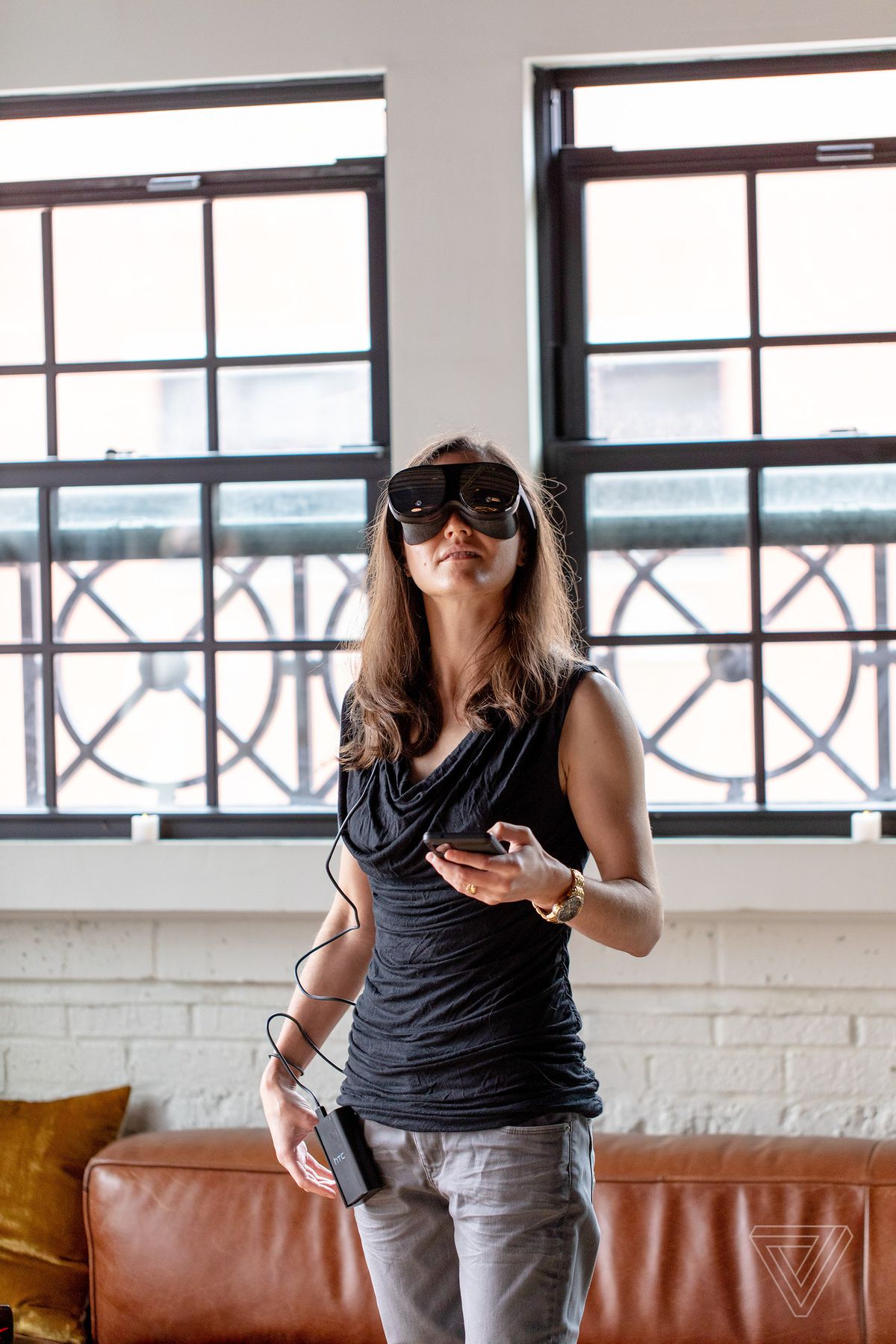 In addition to controlling the device, the phone connection lets you mirror Android apps, calling up a virtual copy of your phone’s homescreen and letting you launch apps like streaming video services in a floating window. The headset doesn’t pair with iPhones, and while HTC hasn’t ruled out future support, it indicated there were serious barriers to making iOS play well with the Flow.

HTC wants people to use the Vive Flow for visually immersive but mostly stationary experiences. So you can watch a 360-degree video or sit in a virtual environment, but you can’t use apps that require full-fledged virtual hands. (This rules out most well-known VR games.) The camera tracking gives you a more natural experience than a headset that can only detect the angle of your head, but the app catalog and the somewhat loose-fitting glasses-style design mean you probably won’t be walking around.

HTC says the Flow will launch with 100 apps and support 150 by the end of the year. In addition to uses like streaming video, its release announcement promotes the Tripp meditation app and the VR therapeutic service MyndVR, which is tailored for older adults. You can also engage with VR social spaces like Vive Sync and watch streaming video, something that’s proven popular on AR glasses. The Flow will support a limited subset of the apps on HTC’s Viveport store, and users can subscribe to a discounted, Flow-focused $5.99-per-month version of Viveport’s app subscription service.

The Vive Flow seems basically pitched as a VR headset for people who find current VR headsets overcomplicated or intimidating. O’Brien describes the device as something that’s easy to put in a bag while traveling without worrying about extra pieces like controllers. “We wanted to make something that was super easy and flexible,” he says. Instead of directly competing with gaming-oriented headsets, HTC is trying to carve out a new category of its own.

HTC’s focus on older users (“the huge Boomer population,” as a MyndVR representative put it) is part of this strategy. So is the push for a glasses-like design instead of the straps you’ll find on most headsets. “There’s the user that really just wants this thing to be un-intimidating and easy to pop on and off,” O’Brien says — and that’s who the Flow is made for. The result has a lot in common with the now-discontinued Oculus Go, but with a svelter look and upgrades like the inside-out camera tracking.

My brief experience with the Vive Flow was a mixed bag. The Flow is, in fact, remarkably light — presumably in part because HTC offloaded its battery. But without a strap system to keep the headset in place, the screen kept slipping down my face and blurring the top half of my VR experience. HTC plans to offer alternate swappable face gaskets for different fits, and one of them worked better than the original. But I still had to be careful while turning my head, and the feeling of carefully balancing the headset wasn’t exactly relaxing.

The Flow was exponentially more bearable than earlier “glasses-style” VR headsets I’ve tried. It’s just still a lot more unsteady-feeling than the Focus 3, Quest, or practically any other major headset, and there’s no alternate strap option for people who want a more secure fit. There’s a diopter adjustment dial so you can change the focus on each eye individually, but like the Quest 2, you inconveniently can’t change the focus while you’re actually looking at an image — you have to take the headset off, twist the wheels a notch, and then put it back on again.

The smartphone-based controller, the Vive Flow’s biggest departure from standard VR design, is theoretically reasonable but practically awkward. I used an HTC-provided Android device that worked fine as a VR laser pointer. But thanks to the long-running trend of ever-bigger phones, I could barely fit my hand around HTC’s phone to tap virtual buttons on the screen. It’s also a strange choice for any headset aimed at older users, who are dramatically less likely to own smartphones. 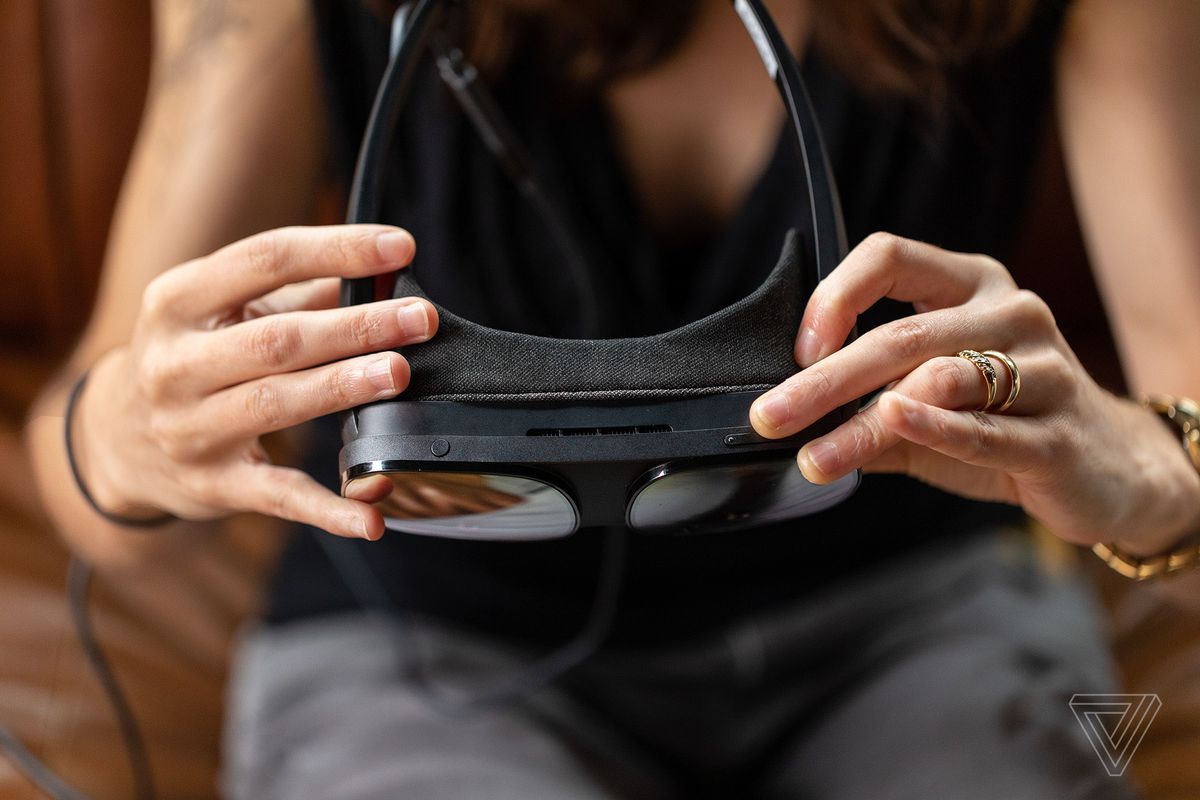 A soft, swappable gasket sits between your face and the lenses.

Hand tracking could partly solve the interaction issue. But gesture interfaces remain frustratingly hit-or-miss and typically require holding your fingers up to perform fine motions, which also seems like a bad option if your hands have limited mobility, and I didn’t get to try HTC’s version in my demo. O’Brien says HTC is still toying with options for other control systems — its plan is to release the headset and then tweak its design based on how people use it.

More generally, it’s not clear HTC’s emphasis on portability is the key to winning over VR doubters. Companies have been pitching “VR you can throw in your bag” for years now, and outside of people whose jobs involve headsets, I haven’t seen a single human being cite that as a selling point — while I’ve heard even skeptics praise bulkier headsets for being comfortable. HTC also says people will feel less awkward wearing this glasses-like design in public settings like airplanes. As someone who actually has worn a VR headset on an airplane, I’m not sure that’s enough to erase its fundamental weirdness.

There isn’t really a clear audience for the Flow in the US market. It’s far more expensive and less feature-rich than the Facebook-subsidized Oculus Quest 2 but without specialized features that might make it appealing for businesses or other organizations. (Film festivals and schools could use a no-frills VR headset for 360-degree video, for instance... but the Flow isn’t it.) HTC has designed social apps like Sync that could have relatively broad appeal. But outside its meditation and video options, my Flow demo didn’t offer a great sense of its day-to-day value. I found mostly small games that I might play occasionally, not tools I’d spend $499 to access.

But HTC has built a strong base of VR business hardware, and for now, it seems content to release the Flow as an experiment. At the very least, you won’t find another major headset like it — even if it does make you sort of look like a bug.