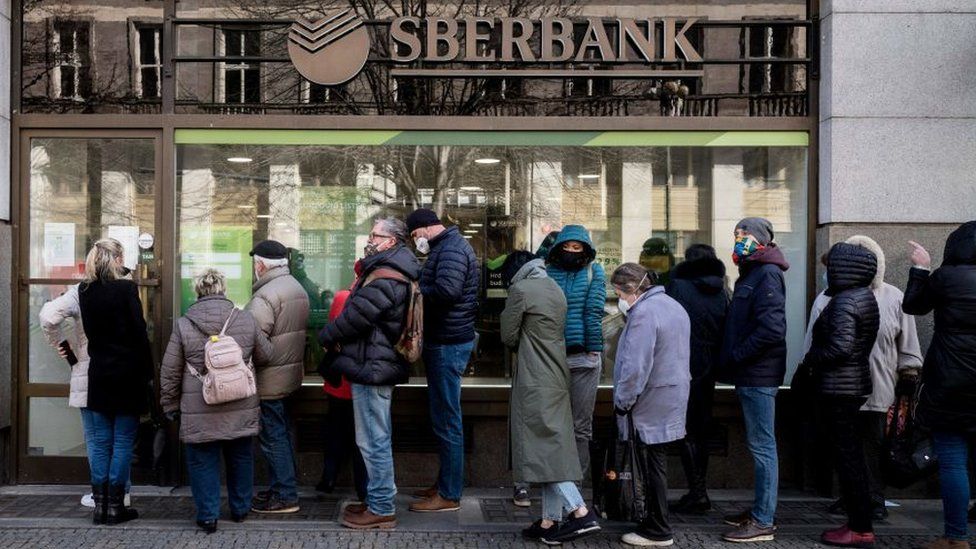 Russia's central bank has issued an appeal for calm amid fears that new financial sanctions could spark a run on its banks.

It said it "has the necessary resources and tools to maintain financial stability and ensure the operational continuity of the financial sector".

The EU, the US, the UK and Canada have announced that the assets of Russia's central bank will be frozen.

Some Russian banks will also be excluded from the Swift payment system.

A run on Russian banks would see too many people trying to withdraw money. On Friday, Russia's central bank was forced to increase the amount of money it supplies to ATMs after demand for cash reached the highest level since March 2020.

The aim of sanctions against the Bank of Russia would stop it from selling assets overseas to support its own banks and companies.

Announcing the measures, Ursula von der Leyen, president of the European Commission, said: "The European Union and its partners are working to cripple Putin's ability to finance his war machine." 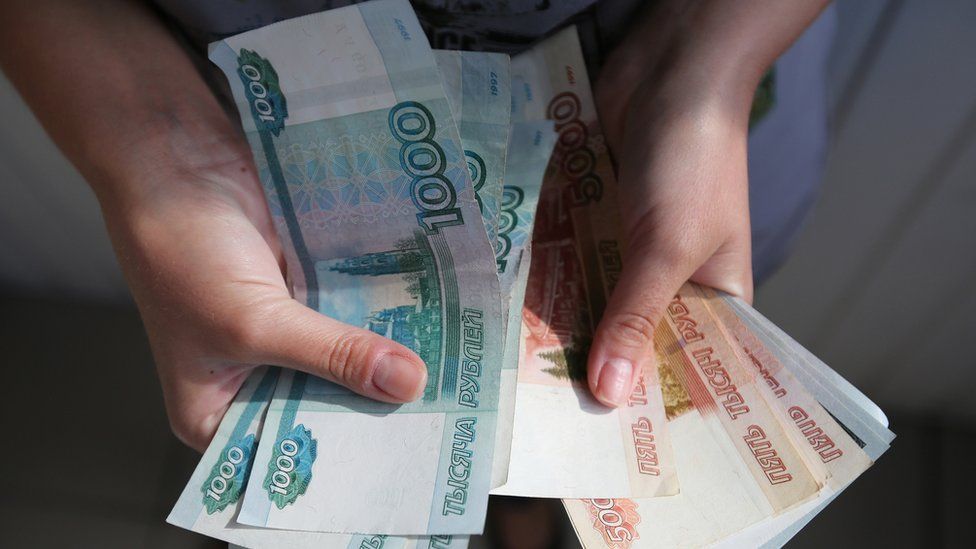 Market analysts predict that on Monday the value of the rouble will drop and Russians may rush to remove their money from banks.

"These new sanctions are likely to cause serious damage to the Russian economy and its banking system", said Clay Lowery, executive vice president at the Institute of International Finance. "This will most likely exacerbate ongoing bank runs... causing a sharp sell-off and a drain on reserves."

But on Sunday, the Bank of Russia insisted: "The Russian banking system is stable, has sufficient capital and liquidity to function smoothly in any situation. All customer funds on the accounts are saved and available at any time."

It also said that it will use its own network, called the System for Transfer of Financial Messages (STFS) , for payments within Russia.

On Saturday, leaders from the EU, the UK, the US and Canada announced that some Russian banks will be excluded from Swift, an international payment system that is used by thousands of financial institutions across the world, following Russia's invasion of Ukraine.

The system is key for the smooth transactions of money globally.

Karl Schamotta, chief market strategist at financial consultancy Corpay, said: "With newly announced sanctions likely to cripple the Russian economy and diminish the attractiveness of anything that can be traced back to Moscow, investors will abandon ship en masse.

"And with the central bank likely to face severe constraints on currency intervention, the rouble will struggle to find a bottom. No-one wants to catch a falling knife."

Prior to the most recent measures, Western states had announced sanctions against Russian banks and some individuals.

Russia's central bank said that customers of sanctioned banks would be unable to use their bank cards outside Russia. It also said it will be "impossible" to use cards issued by sanctioned banks for Google Pay or Apple Pay.

Last week, customers of Sberbank, the Russian state-owned bank, queued outside a branch in Prague to withdraw their money after it was named as one of a number of lenders to face sanctions.

Sberbank temporarily closed its branches in the Czech Republic, citing security concerns for its staff.