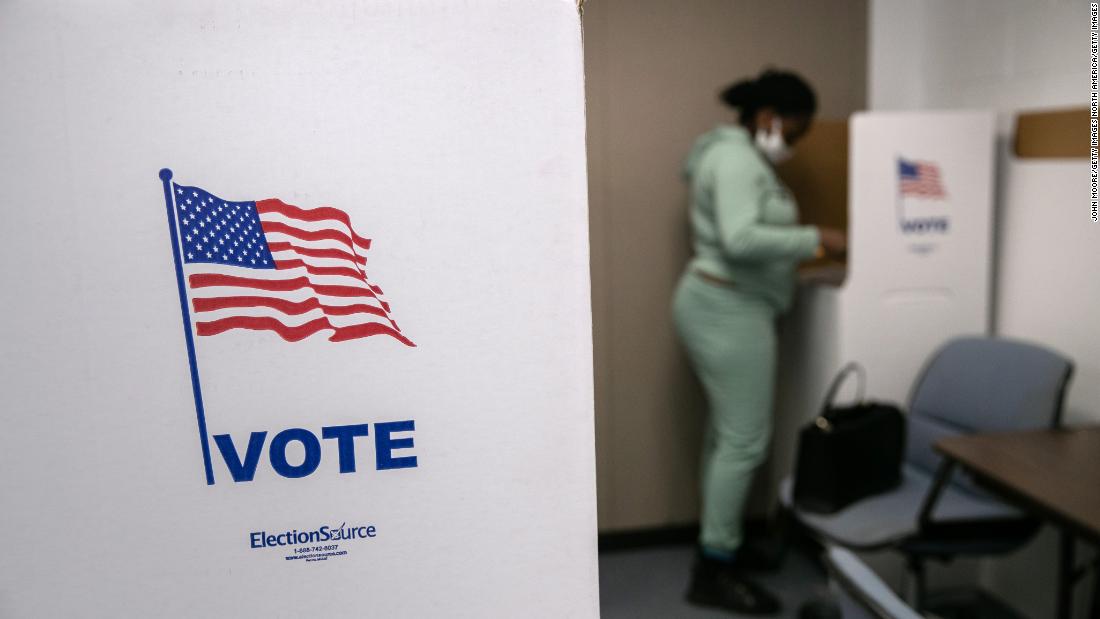 (CNN)In Michigan, a group of Donald Trump's supporters is working on a petition to mandate an outside audit of the 2020 election and establish a grand jury with the power to arrest election officials who refuse to cooperate.

In Wisconsin, some GOP lawmakers are trying to sideline a bipartisan commission that oversees elections in the state.

And Republican legislators from Arizona to Florida are planning to take up new voting restrictions in upcoming legislative sessions.

As a likely showdown looms in Congress this week over federal voting legislation, Republicans aligned with the former President are pressing ahead at the state level to change voting procedures, conduct partisan investigations of the last presidential contest and seize more control over the machinery of elections.

Democrats and voting rights advocates warn that the unrelenting campaign to cast doubt on the legitimacy of President Joe Biden's 2020 victory over Trump could erode voter confidence in elections and increase the chances that losing candidates and their supporters will challenge the results of free and fair elections in the future.

"Every day that goes by, I am more and more concerned about the direction and resilience of American democracy," said David Becker, executive director of the nonpartisan Center for Election Innovation Research. "I'm worried that we are heading down a path where there are those who cannot accept that ... their candidate could lose."

A CBS News-YouGov poll found that more than 6 in 10 of Americans said they now expect violence over the loss of future presidential elections. And a separate poll from The Washington Post and the University of Maryland found that about one in three Americans think violent action against the government is sometimes justified.

The Post-UMD poll also exposed a stark partisan divide: 40% of Republicans and 41% of Independents said violence against the government could be justified versus 23% of Democrats.

In the last year, 19 states passed 34 laws that restrict voting in some way, according to an analysis by the liberal-leaning Brennan Center for Justice. And more changes are expected as state legislatures convene early this year.

Brennan's analysis found 88 restrictive bills introduced last year will carry over into upcoming legislative sessions, and that 13 new bills had been pre-filed as of last month.

The new proposals include a measure that would ban the use of drop boxes in Georgia -- where Biden became the first Democratic presidential candidate to win the state in 28 years. An Arizona lawmaker wants to establish stricter voter ID requirements.

The initiative would establish new voter ID requirements, along with barring election officials from sending absentee ballot applications to all voters. The state, which Biden won by about 154,000 votes, saw record turnout in the last presidential election, with some 3.2 million voters casting absentee ballots.

Under a quirk in the state constitution, if the Secure MI Vote organizers gather at least 340,047 valid signatures in support of their initiative, the GOP-controlled House and Senate can enact the changes without Whitmer having the power to veto it.

Jamie Roe, a spokesman for the group, said volunteers are "on the path" to reaching their goal but declined to say how many signatures they have collected.

Trump loyalists in Michigan also are seeking state approval to circulate a second petition that would mandate a third-party "audit" of the 2020 election. Republican state legislative candidate Jon Rocha, one of the petition's backers, told CNN that he believes Trump prevailed in Michigan in 2020 and said there have been "enough inconsistencies" to warrant a "forensic audit" of results.

If successful, the audit initiative would establish a grand jury with power to subpoena evidence and issue arrest warrants for those "impeding or otherwise stalling" the audit's progress.

There has been no evidence of widespread fraud in Michigan. And last June, a committee led by Republican legislators in the state debunked a raft of fraud claims pushed by Trump and his allies.

Trump aides did not respond to requests for comment, but the former President has maintained an intense focus on Michigan. Last November, he castigated the state's Republican legislative leaders as "cowards" and "spineless" for refusing to agree to his demands for an audit of the 2020 election.

The former President has endorsed Rocha's candidacy -- along with a clutch of other statewide and legislative candidates in Michigan who have questioned the legitimacy of the 2020 election.

Mark Brewer, a former Michigan Democratic Party chairman who practices election and campaign finance law, said the activity by Trump loyalists feels like "a slow-moving insurrection that I think is laying the groundwork to undermine elections in 2022 and 2024."

In Wisconsin, a swing state where the last two presidential elections have been decided by narrow margins, the battles over election administration have grown more heated.

A months-long Republican investigation of the 2020 election ordered by the Wisconsin Assembly Speaker Robin Vos has extended into the new year. Michael Gableman, a former state Supreme Court justice Vos hired to oversee the probe, recently issued a new round of subpoenas, seeking more information from municipal city officials and the Wisconsin Elections Commission, an election agency overseen by a bipartisan board.

Ann Jacobs, a Democratic lawyer from Milwaukee who serves as the elections commission's chairwoman, said Gableman's team recently delivered an "insanely broad" subpoena to an IT employee at the agency. It demanded "any and all communications" about the 2020 election between the employee and any other person since January 1, 2020, she said.

Gableman previously asked a judge to arrest two mayors after failed attempts to compel the officials to testify behind closed doors and provide documents. Court cases related to Gableman's subpoenas are pending.

Gableman's office did not respond to CNN interview requests. Vos spokeswoman Angela Joyce said in an email Friday that the Speaker has asked Gableman for recommendations by February that could help shape new laws this year during the legislative session.

A recount and court rulings have affirmed that Biden won Wisconsin by a little more than 20,600 votes out of 3.3 million cast. And independent reviews by the nonpartisan Legislative Audit Bureau and the conservative Wisconsin Institute for Law and Liberty have not found any widespread fraud. The reviews have called for updates to the commission's policies and state laws.

Republicans have attacked the election agency for months over issuing guidance to local election clerks that eased voting rules during the pandemic. One county sheriff recommended felony charges against five of the commissioners.

A new proposal circulating among legislators from GOP state Rep. Timothy Ramthun would dissolve the commission and transfer its duties to the secretary of state. He did not respond to interview requests from CNN.

US Sen. Ron Johnson, a Republican, has gone further, suggesting that the GOP-controlled state legislature seize oversight of federal elections in the state, bypassing the elections commission. The idea has received a cool reception from state legislative leaders so far.

Johnson, however, has not backed down, citing a portion of the US Constitution that gives state legislatures the authority to establish the "times, places and manner" of federal elections. "It's time for the state legislature to reclaim its constitutional authority over federal elections and make sure that our election clerks follow the law," he said, in part, in a statement to CNN.

Jacobs, the commission's chairwoman, said the rhetoric about elections in Wisconsin has moved into a "much more insidious and much more dangerous" direction than ever before.

"This cannot be what's accepted as normal," she said.