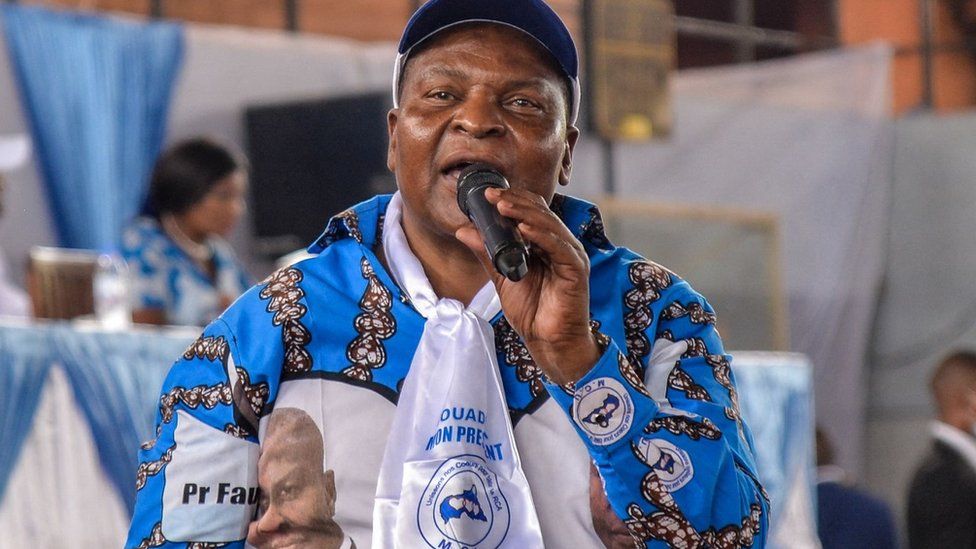 The Central African Republic's decision to adopt Bitcoin as legal tender came as a surprise to many, but the government argues that it will secure an independent financial future for the country, as the BBC's Damian Zane and Guy Bandolo report.

The president seemed to be following the Elon Musk style of cryptic cryptocurrency tweets.

Under the teasing heading "More to follow" CAR President Faustin-Archange Touadéra typed "Vires in Numeris" - a Latin motto meaning "strength in numbers" that has been associated with Bitcoin. Then came his nation's motto.

This was shared with the world a month after the CAR became only the second country, following El Salvador, to adopt Bitcoin as legal tender.

The mineral-rich nation is ranked as one of the poorest in the world - a situation complicated by a near-decade-long civil war which has devastated much of the country. The government has recruited the Russian mercenary Wagner group to help in its fight against rebels.

The CAR's Bitcoin announcement left many scratching their heads and some wondering if it had more to do with a political shift away from France and towards Russia.

There has certainly not been a sudden explosion in the capital, Bangui, of businesses such as shops or cafes accepting Bitcoin as a means of payment.

According to an estimate from 2020, nine out of 10 Central Africans do not have access to the internet - a prerequisite for using Bitcoin.

That, along with a patchy and unreliable electricity supply, led some to question whether the CAR was the right country to test the theory that cryptocurrencies were set to replace traditional forms of money.

The initial decision, announced on 27 April, was accompanied by little explanation except that it would open up "new opportunities for our country".

The "more to follow" that President Touadéra was referring to in his May tweet was the announcement of a project called Sango - named after one of the country's official languages.

This "visionary" plan would create "a fantastic opportunity for anyone who believes in crypto investing", according to a government press release.

To go on an investor waiting list, the visitor is encouraged to sign up to receive a "secret code".

The code provides access to a flashy slide presentation that declares that the CAR wants to build the "first legal Crypto Hub recognized by a country's parliament, that welcomes businesses and attracts global crypto-enthusiasts".

Sango is a "Crypto Island… the first island in the metaverse that is backed by reality".

The people behind the presentation used a lot of "big words" but "the document was not very clear on exactly what they want to do", says Stone Atwine, a crypto-specialist who runs digital financial services company Eversend.

Among the jargon seems to be a plan to allow people to invest in mining and other industries using Bitcoin and a promise that no income or corporation tax will be charged.

Mr Atwine believes that this could have potential as "a lot of cryptocurrency enthusiasts are looking for great places to build where things are legal".

The CAR has significant deposits of diamonds and gold, as well as other minerals, and Bitcoin is being seen as an easier way to attract investors to the country.

"Impenetrable bureaucracy keeps us stuck in systems that don't give us the ability to perform. The solution was to rethink our economic philosophy," President Touadéra said in reference to the Sango project.

The CAR has large mineral resources, including gold, which could benefit from greater investment

The plan cannot be faulted for its ambition but when it comes to cryptocurrency and ordinary Central Africans, more publicity - and infrastructure - are clearly needed.

"I don't understand what cryptocurrency is," Edith Yambogaze, who sells cassava in Bangui, told the BBC.

"I have a smartphone, but I do not have good enough internet to be able to use cryptocurrency. Also, I do not trust cryptocurrency because there are people who do scams on the internet."

This scepticism seems to be matched by some in El Salvador, where President Nayib Bukele promotes Bitcoin with a missionary zeal.

"El Salvador has had problems with the take-up of the Chivo Wallet," said Ganesh Viswanath-Natraj, an academic at Warwick University specialising in cryptocurrencies.

The Chivo Wallet is a government-developed app to make Bitcoin transactions easier, but recent research suggested that while there were a lot of downloads when it was launched last year, there have been virtually none in 2022.

Some people told researchers that they did not trust Bitcoin.

'The internet is coming'

Backers of CAR's adoption of the cryptocurrency, however, are asking people to be patient.

MP Jean Galvanis Ngassiyombo, who is on the National Assembly's economic, planning and finance commission, admitted that the technological infrastructure was not yet in place in the country.

He is a cryptocurrency investor himself and told the BBC how he gets regular updates about price fluctuations on his phone. "I made money today," he laughed as he showed how the app works.

It is argued that in a country where few people have bank accounts, the adoption of Bitcoin will help encourage savings and offer a safe place to store and transfer money.

Dr Viswanath-Natraj argues that while there are advantages, investor concern about the country's financial stability could in fact drive up interest rates and the volatility in the Bitcoin price could damage savings.

The Cameroon-based Bank of Central African States (BEAC) oversees the CAR's currency, the CFA franc, which is backed by France and is shared by five other countries in the region. It was not happy when the law was passed.

A damning letter sent in April from the bank's governor, Abbas Mahamat Tolli, to CAR's Finance Minister Hervé Ndoba said the Bitcoin law indicated that the country wanted to establish a currency that could compete with or replace the CFA.

He urged CAR to scrap the law, saying it could affect financial stability in the region.

Supporters of Bitcoin, which is hailed as a disruptive force that improves the lives of ordinary people, may not be surprised by the attitude of established economic institutions.

But the criticism and where it is coming from also indicates that the CAR's move may have political motives as well as economic ones.

While France's involvement with the CFA and the fact that it is pegged to the euro ensures its stability, critics also see it as a form of neo-colonial control.

They argue that it stymies economic independence and allows France, the former colonial power, to retain its influence.

The Jeune Afrique journal has reported that some government ministers have a strategy of trying to break away from France.

Despite the fears of the BEAC, it is highly unlikely that the CAR would give up the CFA "as this would cause major economic disruption", analyst Nathan Hayes from the Economist Intelligence Unit told the BBC.

"It's a populist announcement from the government, rather than a serious shift in monetary policy," he said.

It could also signal a move towards Russia.

After President Touadéra came to office in 2016, the country started shifting its strategic alliance from France.

As part of this, mercenaries from the Russian Wagner Group have been used to help fight rebel forces.

There has been speculation that they are paid through the awarding of mining contracts but Bitcoin "would be a way to circumvent any restrictions on payments if they wanted to move away from this in the future", Mr Hayes said.

But for the MP Mr Ngassiyombo, the move towards cryptocurrency has nothing to do with Russia.

"The way we conduct our business… depends on what the president of this country is trying to build for its own people."

And if the glossy Sango presentation is to be believed, he wants to create "a digital future of endless possibilities".

The BBC is not responsible for the content of external sites.