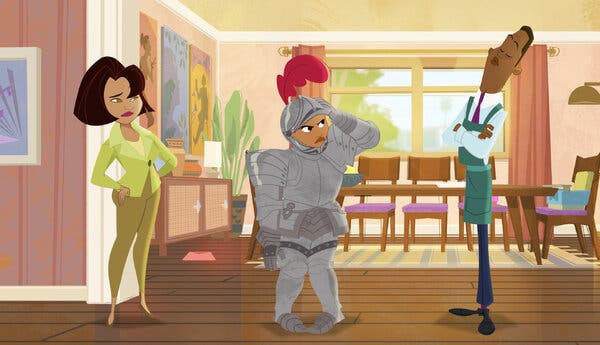 'The Proud Family' Returns, Now Even Louder and Prouder

“The Proud Family: Louder and Prouder,” on Disney+, revives a beloved animated series for a new generation. 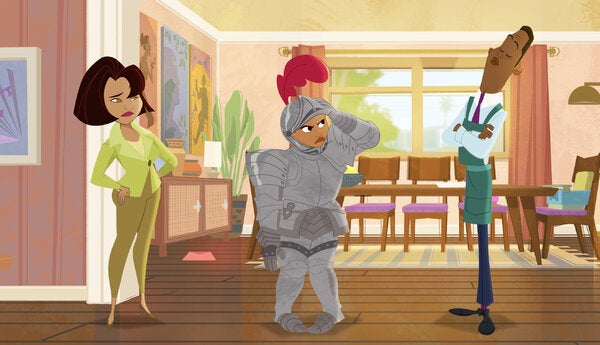 “The Proud Family: Louder and Prouder” brings back most of the original characters and vocal cast, including, from left, Trudy (Paula Jai Parker), Penny (Kyla Pratt) and Oscar Proud (Tommy Davidson). Credit... Disney+

Sign up for the Watching newsletter, for Times subscribers only.   Streaming TV and movie recommendations from critic Margaret Lyons and friends.

When “The Proud Family” debuted on the Disney Channel on Sept. 15, 2001, it introduced one of TV’s first animated African American families.

Over 52 episodes and a TV movie, the series offered a lighthearted depiction of a Black suburban family going about their everyday lives. The headstrong middle-schooler Penny Proud (voiced by Kyla Pratt) took the lead, with her strict but loving parents Oscar and Trudy (Tommy Davidson and Paula Jai Parker), feisty grandmother Suga Mama (Jo Marie Payton) and precocious infant twin siblings BeBe and CeCe rounding out the rest of the clan.

They bickered, supported one another, threw shade and showed love — all of the things that typical on-screen families do. But before The Prouds, TV audiences rarely got to see a Black cartoon family doing those run-of-the-mill things, too.

Now the groundbreaking brood is back with “The Proud Family: Louder and Prouder,” a 10-episode revival scheduled to air weekly on Disney+ starting Feb. 23.

During the show’s original run, from 2001 to 2005, Penny went through the paces of early adolescence — goofing around with her multicultural crew of friends, pouting about chores, dodging school bullies and testing parental boundaries. While many of the show’s themes were universal, they were delivered in a way that was uniquely and intentionally rooted in Black culture. 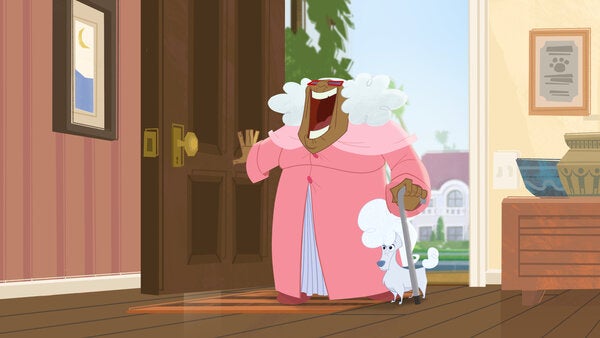 The Proud grandmother, Suga Mama (Jo Marie Payton), is also back. Like the original, the new show includes sight gags that appeal to grade-schoolers and more subtle punch lines for grown-ups. Credit... Disney+

The dialogue was studded with the kinds of colloquialisms and vernacular that can be heard in many Black households. The children’s playground banter employed of-the-moment slang, often pulled from rap lyrics. There were personal jabs about being “ashy” and class warfare was waged whenever the working-class branch of the family butted heads with their “bougie” in-laws.

Even the body language and nonverbal cues — a wary side-eye, an indignant up-and-down glare — were embedded as nods to Black viewers. The humor worked on multiple levels, with silly sight gags that appeal to grade-schoolers and more subtle punch lines to keep grown-ups engaged.

“A lot of what we’d do was like, ‘Wink, wink. You know what we’re saying, right?’” said Bruce W. Smith, the show’s creator. “We were hiding a lot of innuendo and, frankly, family business under the guise of what our characters were saying and going through. Where the show shines is in all of its cultural references.”

Smith is a veteran animator who spent much of the ’90s working on feature films like “Space Jam” and Disney’s “Tarzan” and “The Emperor’s New Groove.” By the end of that decade, he set his sights on serialized television, aiming to fill a void in the small screen’s animated offerings.

“‘The Simpsons,’ ‘Family Guy,’ ‘King of the Hill,’ all these animated sitcoms became the rage,” he said. “I was just looking at them like: OK, we’re not in this. We’re not involved somehow, and we should be.”

At the time, live-action sitcoms like “Moesha” and “Sister, Sister” had proven that Black teenage girls could both carry a series and draw a dedicated audience. Smith set out to create a cartoon sitcom in the vein of “Moesha” — one that centered a Black girl’s life and experiences.

His first step was teaming up with Ralph Farquhar, a creator of “Moesha,” as well as its spinoff, “The Parkers,” and the short-lived Black family dramedy “South Central.” Together, they oversaw “The Proud Family” and its subsequent 2005 TV movie, with Smith also directing several episodes. 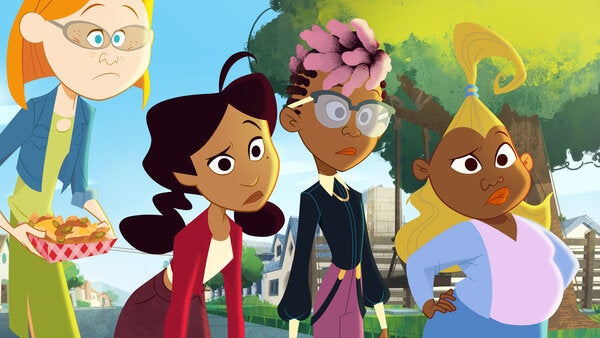 Penny is now solidly into her teens and her peer group has expanded to include her gender-fluid friend Michael, second from right, voiced by EJ Johnson. Credit... Disney+

“The fact that there was no one else doing it was sad,” Farquhar said, in a joint video interview with Smith. “But for us, it was this opportunity. We wanted to tell our stories in a way that we understand. In that nuanced way that only comes from living it.”

Smith added: “The great thing about it was there was nothing before us. There was no bar set. For us, that was exciting because then we could set the bar.”

In addition to commonplace domestic scenes — kitchen table spats, curfew breaches, babysitting snafus — there was a smattering of more educational story lines. These included a poignant Kwanzaa celebration and a Black History Month tribute to oft-overlooked luminaries like the pioneering aviator Bessie Coleman and Shirley Chisholm, the first Black woman elected to Congress.

“That’s what I loved about the original: We talked about things that other people shied away from,” said Pratt, who took on the role of Penny at age 14. “And we’re doing the same thing this time around.”

The revival, which is also overseen by Smith and Farquhar, retains much of the original’s flavor, but it has been updated for the 2020s. Instead of pagers, the kids use smartphones. Dated phrases like “off the heezy fo’ sheezy” are out; “woke” and “Black girl magic” are now in.

The original featured guest appearances by popular early ’00s performers like Lil’ Romeo, Mos Def and Mariah Carey. “Louder and Prouder” is similarly star-studded, with cameos by the likes of Lil Nas X, Chance the Rapper and Lizzo. The heartwarming theme song, performed by Solange Knowles and Destiny’s Child, also got a makeover — the 2022 version is sung by the newcomer Joyce Wrice.

Penny and her friends are now solidly into their teens, with all of the body changes, heightened hormones and social minefields that entails. And a few new players have joined the returning core cast. 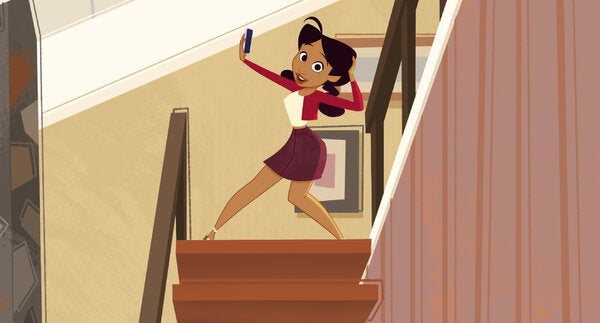 Pratt said she continued to hear from fans long after “The Proud Family” ended. “People were talking to me literally every other day of my life, trying to get the show back on,” she said. Credit... Disney+

Palmer, whose breakthrough came in the 2006 film “Akeelah and the Bee,” credits Farquhar with discovering her a few years earlier, when she was 10. (He cast her in a Disney Channel pilot that didn’t get picked up.) He asked her to join “Louder and Prouder” because he knew she’d been a longtime fan of the original.

“I saw a family that reminded me of my own — I even had boy-girl twins in my family,” Palmer said. “That was a show that represented what my Black American culture looked like. I thought they got it right!”

Nevertheless, Disney chose not to renew “The Proud Family” when the original production run ended in 2005. (Disney declined to comment on the end of the original show.) In the interview, Smith and Farquhar said they have never known why the show wasn’t allowed to continue, but they made clear that they always hoped to bring it back in some form.

“From the moment we stopped doing the original version, we had been campaigning to bring it back,” Farquhar said. “We weren’t quite sure why we ever even stopped.”

They weren’t alone. “The Proud Family” has been a steady source of millennial nostalgia online, with fans sharing art and cosplay photos inspired by the show on social media, and revisiting beloved episodes in blog posts. Pratt said overzealous fans have frequently reached out to her in real life, too.

“People were talking to me literally every other day of my life, trying to get the show back on,” she said.

Farquhar and Smith said they noticed a new outpouring from “Proud” fans after Disney+ began streaming the original on Jan. 1, 2020. Disney apparently noticed, too. The company approached the men about a revival, and then publicly announced it on Feb. 27, 2020.

Farquhar and Smith have since signed a multiyear overall deal with Disney to produce animated and live-action series and movies and to develop projects for emerging and diverse talent. Smith boasted that the “Louder and Prouder” staff, from the directors to layout artists to animators, “looks like the show.” (Like most of the entertainment industry, animation has historically offered far fewer opportunities to women and people of color than to white men.)

Smith has wanted to expand Black people’s presence and influence in animation since he started working in the industry in the early 1980s, he said, a mission informed by his own experiences as a young cartoon fan.

“When I was growing up, I loved shows like ‘The Flintstones’ and ‘The Jetsons,’” he said. But together they painted an unwelcoming picture: “I didn’t exist in the beginning of time, and I don’t think they’re looking for me to exist when spaceships start flying off this planet.”

“I gotta do something about that,” he continued. “Because I love this medium and I want to see myself in this.”