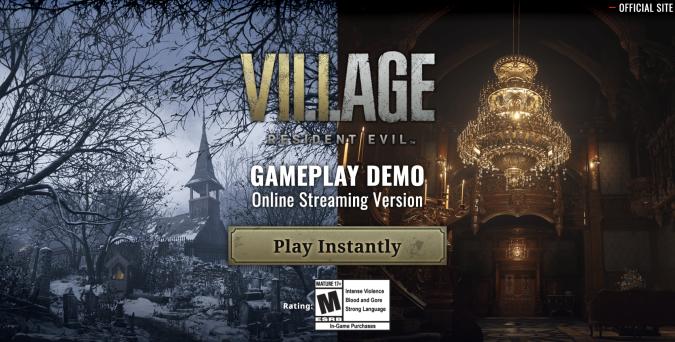 Starting today, you can stream a free demo of Resident Evil Village  from Capcom's website, with no need for a fancy gaming PC, Xbox or PlayStation. The demo is similar to one that's available on other platforms, which allows players to explore parts of the village and castle. This appetizer for one of last year's biggest-selling games is powered by Immersive Stream for Games, a version of Stadia tech that Google is licensing to others.

The demo will work on just about any computer, as well as iOS and Android phones and tablets, as long as the device can handle high-definition video and you have a sturdy enough internet connection (with a download speed of at least 10Mbps). It runs on Chrome on Windows, macOS and Android. On iOS, you can try it on Safari. The resolution tops out at 1080p and there's no HDR mode.

PlayStation DualShock 4 and Xbox One controllers are officially supported, but other peripherals might work. Alternatively, you can use touch controls on mobile or a mouse and keyboard. As with Stadia's click-to-play trials, there's no need to register to play the demo. It's worth noting that you'll be disconnected after 10 minutes of inactivity. There's no save function, so you'll need to restart from the beginning if you disconnect. You can play as many times as you like and there's no time limit, unlike previous versions of the demo.

You can play the demo on Capcom's website if you are in the US, UK, Canada, France, Italy, Germany, Austria, Spain, Sweden, Switzerland, Denmark, Norway, Finland, Belgium, Ireland, the Netherlands, Poland, Portugal, Czech Republic, Slovakia, Romania or Hungary.

Back in February, Insider  reported that Google was looking to secure deals with Capcom, Peloton and others to build the licensing aspect of its game-streaming business. It was suggested that Capcom might use the tech to stream demos from its website, which turned out to be the case. This could even be a precursor to Capcom running its own game streaming storefront.

In other Resident Evil Village news, Capcom is bringing the game to Mac later this year. It's also working on a version for the upcoming PlayStation VR2 headset.