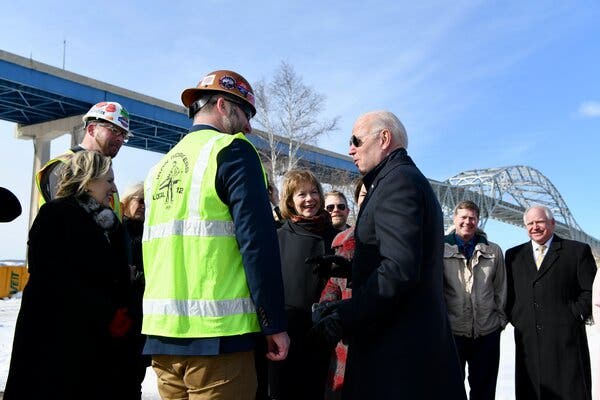 As Biden Pivots, Democrats Seek to Salvage His Domestic Agenda

The president repackaged his sweeping domestic policy plan with more centrist language, but it remained unclear whether Congress would resurrect key elements of his agenda. 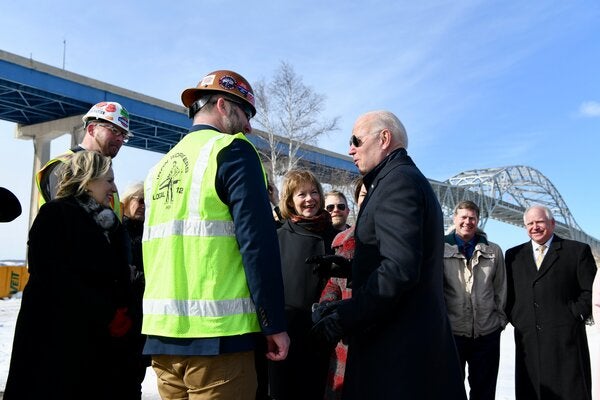 President Biden speaking with city officials and workers at a bridge in Superior, Wis., on Wednesday. The president continued his rebranding effort during his trip across the Upper Midwest. Credit... Kenny Holston for The New York Times

WASHINGTON — President Biden’s State of the Union address on Tuesday was the start of an election-year push to reframe his domestic agenda away from the sweeping aspirations of his first year in office and toward more practical and politically appealing goals: driving down rising prices, controlling the pandemic, addressing crime.

Gone were the expansive warnings about the “existential threat” of climate change, explicit promises to advance “racial equity” in infrastructure projects and even the name of his $2.2 trillion Build Back Better package of social welfare and climate spending, once promoted as a transformative initiative akin to the Great Society programs of the 1960s. Instead, Mr. Biden described his agenda as a solution to the “rising cost of food, gas, housing,” pivoting to more centrist language in a nod to disaffected moderate Democrats who have pushed for their party to focus on the daily concerns of voters ahead of midterm elections they are expected to lose.