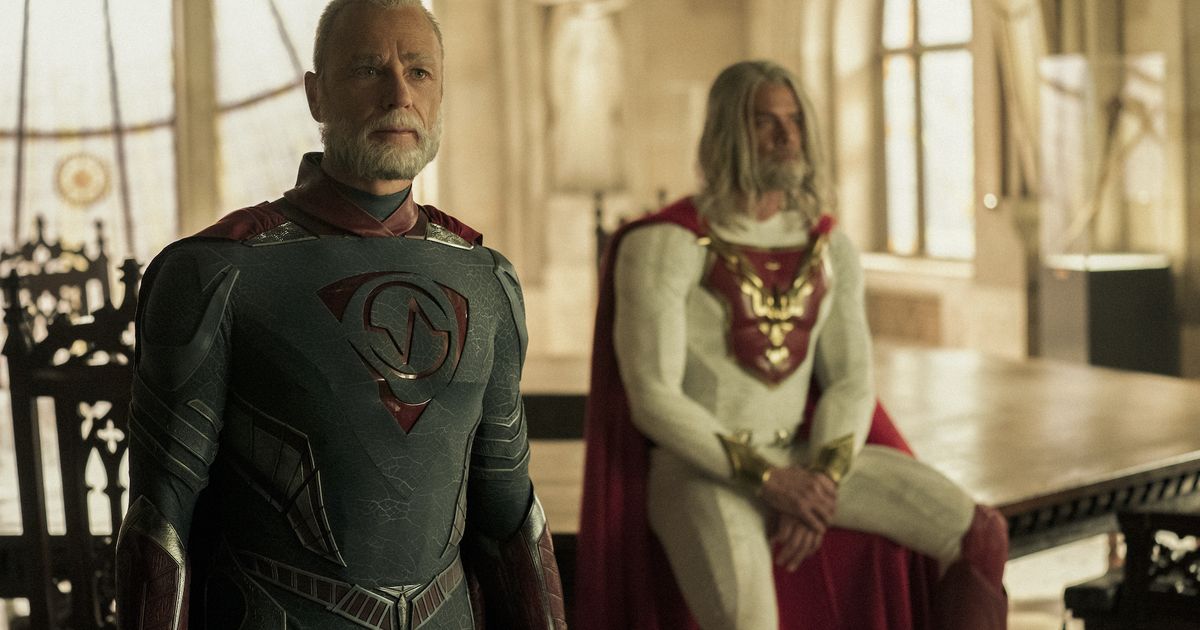 'Jupiter's Legacy' tells two stories and gets nowhere with either

All products featured here are independently selected by our editors and writers.If you buy something through links on our site, Mashable may earn an affiliate commission. By Alexis Nedd May 07, 2021 Describing the current proliferation of comic book superhero adaptations as a "moment" would be a hilarious understatement. We are one-fifth of the way through the 21st century and in those two decades, stories about caped crusaders and masked heroics became so ubiquitous as to define the entertainment landscape. The largest share of the comic book super-pie goes to Disney's Marvel Cinematic Universe of movies and TV shows, but there's also the DC Extended Universe, Watchmen , The Umbrella Academy , The Boys , the CW Arrowverse, Invincible , and many more.  Netflix's Jupiter's Legacy, based on a long-running comic series by Mark Millar and Frank Quitely, enters the fray with a first season that aims to take its place as a new must-watch adventure, and instead proves that superhero series are officially a genre as common as medical dramas or cop shows — and can be equally as mediocre.  Jupiter's Legacy tells the story of The Union, a group of superheroes who gained their powers in the 1930s and are now the elder generation in a new world of powered individuals. Some of those individuals are the heroes' own children, who have mostly inherited their powers and struggle to live up to their parents' shining example. Most central to the plot are Sheldon Sampson/The Utopian (Josh Duhamel) and Grace Sampson/Lady Liberty (Leslie Bibb), the two most powerful heroes in the Union, and their children Brandon/Paragon (Andrew Horton) and Chloe (Elena Kampouris). There's also Walter Sampson/Brainwave (Ben Daniels), Sheldon's brother and a bunch of other heroes who come and go in a revolving door of "here is person, here is their power, goodbye" appearances.   Half of Jupiter's Legacy concerns a modern day story involving the Sampson family's messed up dynamics. Brandon wants to live up to his father's expectations and become the next Utopian while Chloe rejects the whole great power/great responsibility thing and spends her time snorting a catastrophic amount of hard drugs. There's also a main plot where Union members old and young begin to have doubts about their "code," which forbids killing villains. Also there's a nuclear bad guy who isn't actually himself, hints that two of the founding members of the Union betrayed everyone at some point in the 20th century, and a charismatic gang of powered burglars.  The half-modern, half-period format completely wrecks the pacing in "Jupiter's Legacy" and cuts both of the show's plot lines bafflingly short. The other half is a bafflingly slow flashback showing how Grace, Sheldon, Walter, and the other OG Union members met in the 1930s and got their powers. It is impossible to overstate how much momentum the flashbacks, which again are fully half of each episode, remove from the main narrative. It's especially baffling because the flashbacks start after we've already met most of the characters in them. It takes eight episodes of flashbacks starring Young Utopian, Young Lady Liberty, and Young Brainwave to get to the ultimate payoff of this plot, which is that these characters become Utopian, Lady Liberty, and Brainwave.  The half-modern, half-period format completely wrecks the pacing in Jupiter's Legacy and cuts both of the show's plot lines bafflingly short. As mentioned above, the 30s story ends when the heroes, who we know get powers, get powers. The modern plot then suffers from squeezing eight episodes' worth of forward-looking plot into the runtime of four episodes. There simply isn't enough time for the modern characters to make progress in their arcs, so Season 1 ends with everyone pretty much exactly as they were in the first episode, just angrier.  There are some fun parts of Jupiter's Legacy. Daniels and Bibb are particularly good as Brainwave and Lady Liberty, but they also are the two characters who change the most over both the 1930s and modern day arcs. The battle scenes are grossly violent in that "yuck, cool!" way that more sanitized superhero shows rarely touch. Aside from that, it's almost impressive that a show can make it an entire season running two entire plotlines and have nothing happen in either of them. Turns out Jupiter's actual legacy is boring family drama and laser eyes.  Jupiter's Legacy is now streaming on Netflix. Sign up for Mashable Newsletters to get personalized updates on top stories and viral hits.