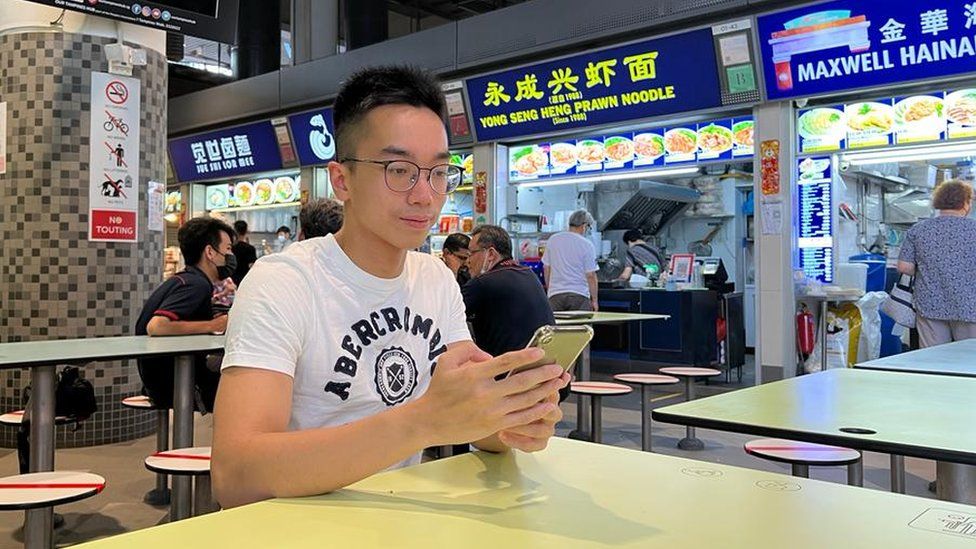 How Gen Z is hooked on cryptocurrency and NFTs

Paxton See Tow, 20, started trading crypto because of the hype around digital currencies

The lure of making a quick buck has always attracted young people to invest in risky assets. For Generation Z, it is the volatility - and the decentralised nature - of digital assets such as cryptocurrency and NFTs which appeals. But they are unregulated, meaning there is little investor protection.

"All my friends were talking about [cryptocurrency] so one day I just decided why not just jump in and see if I can make some money," says 20-year-old Paxton See Tow.

All he needed was his phone and trading thousands of dollars' worth of assets was only a click away.

Generation Z - also known as Zoomers - are the age group born between the mid-1990s to early-2000s. They grew up online, playing games and meeting friends virtually, so the transition is natural.

Cryptocurrencies are digital currencies while a "non-fungible token" (NFT) is a way of owning an original digital image, touted as the digital answer to collectables.

Just over a year ago, Paxton bought S$1,000 ($743; £739) worth of Bitcoin - one of the most popular cryptocurrencies - which gave him a 10% profit straight away. He decided to quadruple his portfolio. But then the price fell.

"There's always the saying 'buy low, sell high' but I did the complete opposite. I let my emotions get the better of me," he says.

He had lost a thousand dollars, on top of all the money he had invested, before he could pull his money out and re-strategise.

For another, older trader, Kelvin Kong, the loss was much bigger. After making six figures in 2017, he lost more than half a million dollars the following year.

Kelvin Kong lost half a million dollars in crypto in 2018

"I lost everything," he says. "I thought I was the king of trading and my head got really big so I thought nothing could bring me down and I kept buying," he says.

In the end, he only had a few hundred dollars left in his bank account.

"I think I almost went into depression. I had suicidal thoughts."

The boom in crypto and NFTs trading among young people worries him.

"A lot of them will lose money at the end of the day," he adds.

For many, the first taste of digital assets are through "play-to-earn games" which reward players with NFTs and cryptocurrencies that can then be used within the game itself, or traded for cash.

"Every kid wants to make money playing games," says a 23-year-old trader in Malaysia who goes by the name of YellowPanther. "That's the dream of my generation."

A month after he started trading NFTs last August, he decided to quit his job as a marketing executive to trade them full time.

"The day job took a long time - eight to nine hours a day - and the pay was quite low. I saw a big opportunity in the [NFT] space and I took the leap of faith," he says.

Resh Chandran describes himself as a financial educator

Using Axie Infinity, one of the most popular "play-to-earn games", Mr Chandran introduces investors to mostly Filipino gamers who play on their behalf for a fee.

But he warns the space is a "wild wild west".

The pandemic has only accelerated this growing trend of young people trading crypto and NFTs.

"Young people were at home and it's almost a gamification of trading. All of these factors created a perfect condition for this to take off."

Brian Jung, 23, boasts one million YouTube followers but compared to other crypto influencers, he is known to talk more cautiously about the risks.

YouTuber Brian Jung has more than one million subscribers

"I really have to make sure I'm careful about what I say to my audience because the last thing I want is for people to get hurt from these types of videos," he tells the BBC.

Brian's family emigrated from South Korea to the US and he believes his background affects how he invests and talks about money.

"Our family always struggled financially so I always have this frugal mindset," he says.

"My mum still works at the US Post Office and my dad works in a warehouse so I know one hour of their time is still equivalent to dollar value. I see what that is worth, regardless of how much income that I'm getting right now."

But as well as the opportunities to make money, Jowella enjoys being at the forefront of this new technology.

As governments around the world look to regulate the industry, she believes they will help legitimise crypto and NFTs.

"Regulators have to eventually compromise and realise that this is a tech they cannot ignore, especially when it's constantly penetrating this society," she adds.

Aside from financial losses, another big danger is addiction.

"The crypto market never sleeps so people really literally get sucked into it," says Mr Chandran.

Andy Leach, from addictions clinic Visions by Promises in Singapore, says he has seen a jump in young - particularly male - clients getting addicted to the thrill of trading crypto and NFTs.

"You have the ability to watch Bitcoin going up and down and basically this process, this rollercoaster ride, the highs, the lows, it's available on your phone 24/7," he says.

Despite losing money in the crypto market in the past, both Paxton and Kelvin are back trading after studying it more closely.

I asked Kelvin if he thinks he may be addicted. "You can put it that way," he smiles. "But I would call it passion."