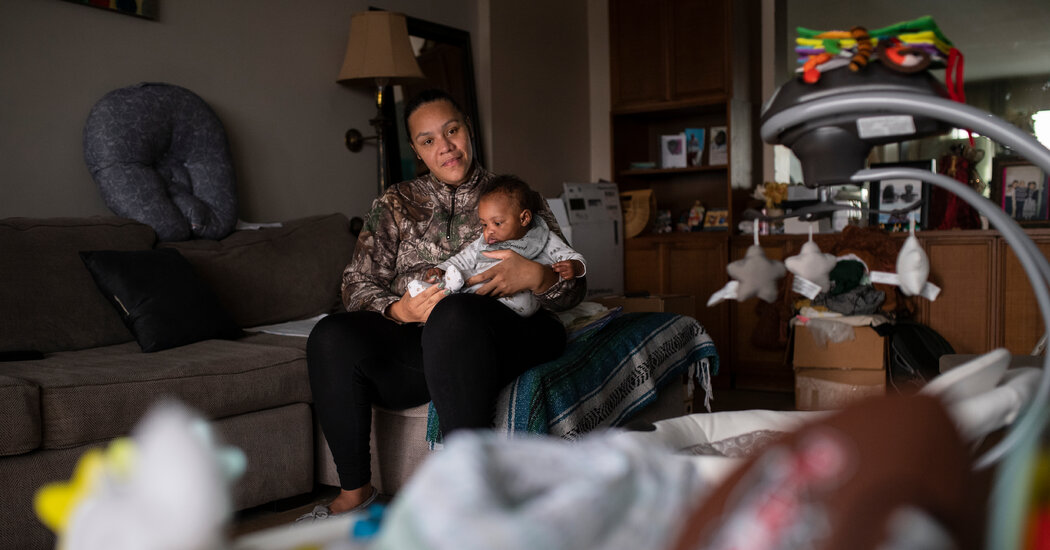 How $1,000 a Month in Guaranteed Income Is Helping N.Y.C Mothers 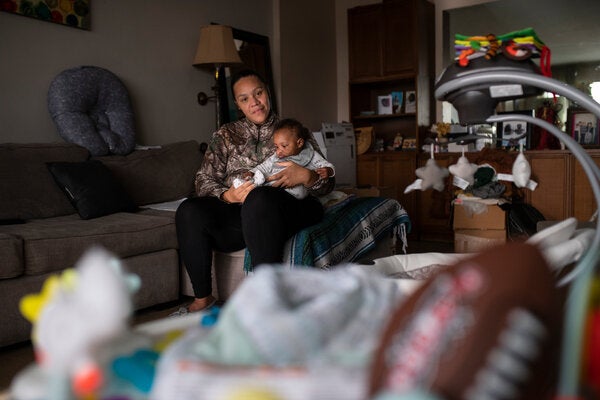 Maureen Gardner, with her son, Garrett, has saved part of her guaranteed income in case she needs to move as a result of owing back rent on her Harlem apartment. Credit... Gregg Vigliotti for The New York Times

The fliers that appeared at bus stops and nail salons and health clinics in Upper Manhattan last June sounded too good to be true.

“I thought it was a scam,” said Angelina Matos, who had just given birth to a daughter.

It was not a scam. It was an experiment in the fast-growing field of anti-poverty policy known as guaranteed income.

In July, 100 new mothers in Washington Heights, Harlem and Inwood began receiving free money from a program called the Bridge Project: a $16 million effort, funded by a foundation started by a venture capitalist and his wife, to measure the effect of regular, unconditional stipends on low-income families.

Much of the money is going toward basic baby supplies. But interviews with four women in the program turned up many examples of the surprises and challenges life can throw at a new mother.

One woman bought a special high chair for her son, who shows signs of cerebral palsy. Another has been saving money for an expected battle with her landlord. A mother of two on West 145th Street is finding the regular infusion to be a lifesaver when food stamps run out.

Bridge Project money let Ms. Matos, 18, quit her minimum-wage job and prepare for nursing school. Without it, “I would have to keep working while I’m going to school,” said Ms. Matos, who lives in Inwood with her mother, brother and 9-month-old daughter.

In April, the program will add 500 expecting mothers and expand into East Harlem, the South Bronx and the Central Bronx. The expansion comes after Congress did not reach an agreement on extending the federal child tax credit, which was giving families up to $300 monthly per child.

New Yorkers may be familiar with the concept of guaranteed income through the presidential and mayoral candidacies of Andrew Yang, who last year lofted a billion-dollar proposal to give $2,000 annually to the poorest half-million city residents, without making clear how he’d pay for it.

The nonprofit that runs the Bridge Project, the Monarch Foundation, said it hoped to partner with New York’s new mayor, Eric Adams, but has not approached him yet. (During the campaign, Mr. Adams derided Mr. Yang’s idea as “monopoly money.”)

The central idea of the guaranteed-income movement is that the most effective treatment for poverty is to simply give people money and let them decide what to do with it, rather than impose the rules, limitations and bureaucratic hoops that come with most safety-net programs.

“You’re talking about giving somebody money and letting them apply it to the highest-need area of life: keeping the heat on, contacting family in Venezuela, taking an Uber to the hospital, getting an unlimited MetroCard,” Megha Agarwal, the foundation’s executive director, said.

The Bridge Project families, whose household incomes average $14,500 — below the federal poverty line — are roughly half Black and half Hispanic; about 20 percent of the mothers are undocumented. More than 70 percent had less than $100 in savings.

The families will be surveyed to track their economic and housing stability, their physical and mental health, and their children’s developmental progress.

Some Bridge Project families also receive government money. About 5 percent get monthly Temporary Assistance for Needy Families, and some receive the annual federal and state earned-income tax credit, the Monarch Foundation said. While Bridge Project money affects some families’ benefits, including food stamps, the project said that everyone in the program is seeing a net gain overall.

Guaranteed income shot to national prominence in 2018 when the city of Stockton, Calif., decided to give $500 monthly to 125 families in poorer neighborhoods.

Today, more than 35 guaranteed-income pilot projects are underway, in at least 17 states, distributing more than $25 million a year to over 7,000 families, according to the Economic Security Project, which advocates for direct-cash programs.

The Stockton project found that people in the study who received money found full-time employment at twice the rate of those who did not. They were also less depressed and anxious, slept better and had better physical health.

In New York, the nation’s biggest city, though, guaranteed income has had little presence. A project led by neuroscientists, Baby’s First Years, is giving $333 monthly to mothers in four cities, including 114 in New York, and measuring its effect on the development of a child’s brain. And in 2020, when Mr. Yang ran for president, a nonprofit he founded gave $1,000 apiece to 1,000 Bronx families.

There is plenty of need, though. More than one in four Black children in New York City live in poverty, as do nearly one in three Hispanic children, according to the Citizens’ Committee for Children of New York.

The Bridge Project sprang from Nido de Esperanza, a nonprofit that helps low-income mothers in Washington Heights, and was founded by Holly Fogle, the wife of a venture capitalist, Jeff Lieberman. The couple also run the Monarch Foundation.

Early in the pandemic, Ms. Fogle said, Nido’s offices were flooded with desperate calls. “I had moms calling saying, ‘We have no diapers, no cash, no formula for this baby and we’re scared to leave our apartment,’” she recalled.

Nido distributed $150,000 in aid to 100 families, and Ms. Fogle, a onetime finance major, became a believer in what she called the “return on investment” of direct aid.

For Maureen Gardner, 35, the Bridge Project came along when she was six months pregnant, not working and had just learned that the woman she had been subletting her Harlem apartment from apparently had been pocketing her $1,500 rent checks.

“When I called the management office they were like, ‘We don’t know who you are, we don’t know who this lady is,’” Ms. Gardner said. She was told she owed thousands in back rent.

Because she receives food stamps for her and her son, Garrett, who was born in September, and has not been paying rent while her tenancy remains disputed, Ms. Gardner has been able to save nearly $5,000 from her Bridge Project payments.

“When it is time to leave, I’ll have the money to leave,” she said.

She also made a purchase that some would view as a luxury but that Ms. Gardner sees as a way to protect her and Garrett’s health: a $430 washing machine that lets her avoid her building’s laundry room, where many tenants do not wear masks. “My baby doesn’t even have shots,” she said.

Like the other three women interviewed for this article, Ms. Gardner said that her child’s father contributed money sporadically and that she could not count on his consistent support.

For Ms. Matos, the Bridge Project gave her the luxury of time. She quit her job as a program aide at the Harlem Children’s Zone in October to prepare to start nursing school next week.

Amy Castro, a co-director of the Center for Guaranteed Income Research at the University of Pennsylvania, said that “time scarcity” kept many poor families mired in poverty.

“If you’re struggling to make ends meet and you’re knitting together two or three part-time jobs,” she said, “you don’t have time to plan for the future or even to think.”

A 35-year-old immigrant from Nigeria who gave her name only as Sue because she is undocumented said that $500 monthly from the Bridge Project lets her buy snacks for her 3-year-old son, who does not like the lunches at his preschool. “I don’t want him to be on an empty stomach every day,” she said.

Sue, who works part time at a beauty supply store and receives some financial support from an aunt, gets $459 in food stamps for her son and 9-month-old daughter, but her food stamp card falls short.

“That’s where I have the backup with the Bridge money,” she said.

Guaranteed income is hardly a panacea in a city as expensive as New York.

“An additional $500 or $1,000 is not going to get you out of homelessness in New York City,” Dr. Castro said, “but it might prevent you from hitting that bottom.”

It has had that effect for Daniela Gutierrez. Before the pandemic, Ms. Gutierrez, 28, scraped by working jobs in three different boroughs — at a Chipotle in Manhattan, as a tutor at a library in the Bronx, and in the enrollment office of the New York City College of Technology in Brooklyn. 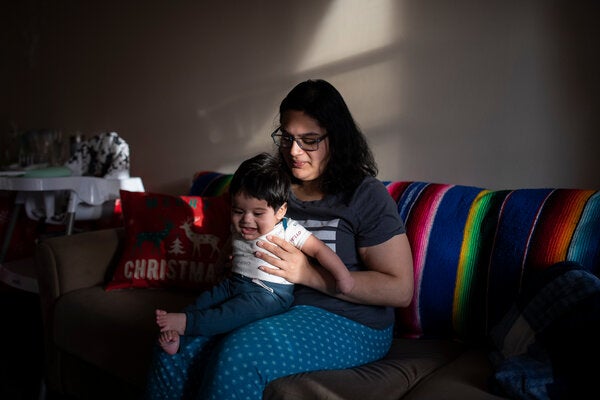 “I think I’m going to be sleeping worry-free for the first time in a while,” Daniela Gutierrez said of the guaranteed income she receives.  Credit... Gregg Vigliotti for The New York Times

Soon the library closed and Chipotle slashed her hours. Then she got pregnant. Her rent was $1,044 and she was taking home about $1,000 a month.

“I was actually looking for shelters before I got a reply from the Bridge Project,” she said.

After her son, Jeremiah, was born in June, it was quickly apparent that he could not move normally. Doctors told Ms. Gutierrez he might have a form of cerebral palsy.

Ms. Gutierrez is working her job at the college remotely, which lets her take breaks to massage Jeremiah to help relieve the muscle spasms that rack his body. But she is bracing for the day when she will have to return to the office and find a way to pay for child care.

“I need to find a place that would care for him the same way I do,” she said.

Ms. Gutierrez was under the impression that the Bridge Project money was for only a year. “I have six months left, and that rushes by really fast,” she said. “It’s just a stressful, stressful situation.”

A few hours later, the Bridge Project confirmed that the payments were for three years.

“I think I’m going to be sleeping worry-free for the first time in a while,” Ms. Gutierrez said.