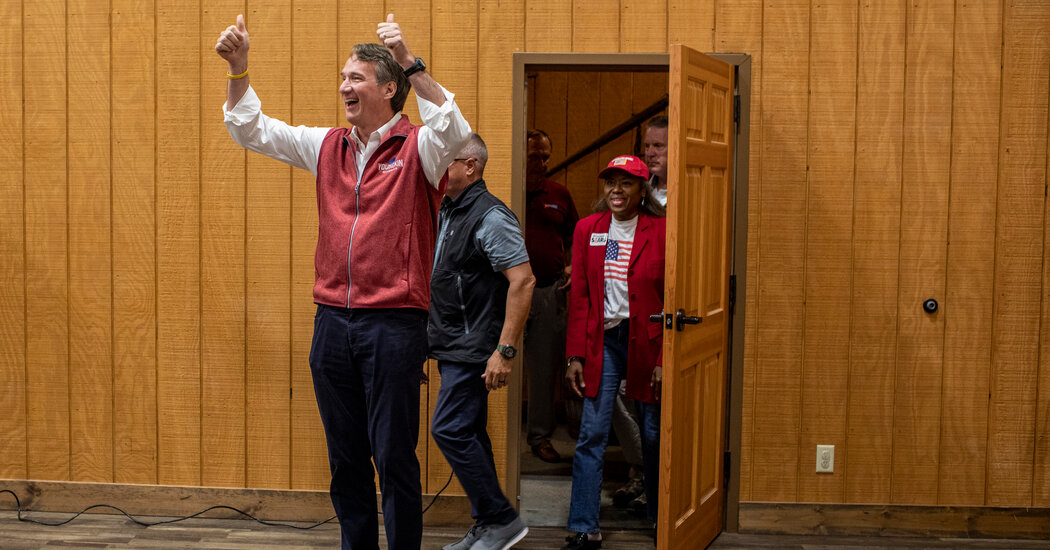 Glenn Youngkin Was a Traditional Republican. Then He Became a Culture Warrior.

As he runs for governor of Virginia, Mr. Youngkin has built a coalition, as one prominent conservative described it, of Trump voters and angry parents. 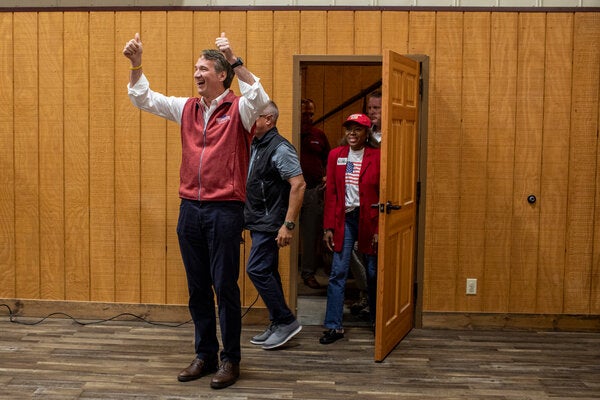 Glenn Youngkin, the Virginia Republican who is running for governor, has pushed causes that are animating conservatives and Trump supporters. Credit... Jason Andrew for The New York Times

For months as he campaigned for governor of Virginia, Glenn Youngkin tried to sound a lot like the kind of Republican who dominated the party back in 2009 — the last time a Republican was elected to statewide office.

He avoided discussion of divisive social issues in favor of praise of free markets and job creators, and conservative activists knew very little about him or what he believed as a result.

“He was on nobody’s radar screen,” said John Fredericks, a radio host who was chairman of Donald J. Trump’s presidential campaigns in Virginia in 2016 and 2020.

In the final days before the election on Tuesday, many Republicans say they still have no idea what Mr. Youngkin really believes. But they have cheered him on regardless, after he took a hard-right turn and began promoting the causes that are animating conservatives and supporters of the former president, from the debate over teaching the impact of racism to transgender rights in schools.

To Mr. Youngkin’s critics, his culture warrior persona is cynical and disingenuous — just the kind of transactional decision that a career investment manager with a fortune estimated at close to $400 million would make to win.

But to his Republican supporters, whether or not it’s an act isn’t really the point.

As long as Mr. Youngkin is saying what they want to hear and signaling what they understand he cannot say out loud — running on the issue of “election integrity,” for instance, rather than wholeheartedly accepting Mr. Trump’s lies about election fraud in 2020 — many conservatives see his campaign as providing a template for how to delicately embrace Trumpism in blue states.

“What he’s done is he’s danced on the edge of a knife for seven months,” said Mr. Fredericks, who initially backed a more overtly pro-Trump candidate before Mr. Youngkin won the Republican nomination. “But he’s built a coalition that is very formidable — Trump voters and angry parents.” He added, “I think Trump supporters understand there really is no time for internal squabbling or hurt feelings. They understand the stakes of this election are enormous.”

Mr. Youngkin’s Republican detractors, however, see an opportunistic politician pandering to the party’s base.

“Whether he believes in this Trump stuff or if he’s trafficking in it, I don’t know,” said David Ramadan, a former Republican member of the Virginia House of Delegates who now teaches at George Mason University. “But if he doesn’t really believe this stuff and is just trafficking in it,” Mr. Ramadan added, “that’s worse than believing it.”

The Youngkin campaign did not respond to an interview request.

On paper at least, Mr. Youngkin, 54, is an odd fit for a party that has rejected the elitism he embodies. In fact, his life and career have had far more in common with Mitt Romney’s than Mr. Trump’s: a degree from Harvard Business School, a long and lucrative career in private equity, devout religious convictions and even a family love of horses. He owns a 31-acre horse farm in Fairfax County with his wife, Suzanne.

Before he entered the governor’s race — his first try at elected office — Mr. Youngkin donated extensively to Republican candidates who were aligned with the party’s establishment wing: Jeb Bush, the former Florida governor; Senator Susan Collins of Maine and Senator Rob Portman of Ohio; and former Representative Paul Ryan, according to federal campaign finance records. He gave Mr. Romney’s campaign and its allied political groups $75,000 during the 2012 campaign, records show.

Those affiliations and his lack of a reputation in Virginia Republican politics made many conservatives skeptical of Mr. Youngkin. His background did, too. He worked as a consultant for McKinsey Company before joining the Carlyle Group, a Washington-based private equity firm with deep roots in the political establishment. He worked there for more than 25 years, climbing the ranks and eventually becoming a co-chief executive officer. He announced he was leaving the firm in the summer of 2020 and declared his candidacy for governor a few months later.

As the country’s culture wars reached a boiling point earlier this year, angry parents in Loudoun County denounced school administrators for implementing a curriculum that they said taught white students they were racist. Mr. Youngkin seized on the issue, surprising conservatives who assumed he was more in the mold of Republicans who have fallen out of favor with the activist base.

“Where you have to give Glenn Youngkin credit is he leaned into it,” said Terry Schilling, president of the Virginia-based American Principles Project, which has been running pro-Youngkin ads. “I didn’t see a willingness from him to take these issues on. I just assumed he was a Mitt Romney-type candidate.”

One of the group's ads centers on the sexual assault of a girl in a high school bathroom, a case that conservatives have used to criticize transgender bathroom laws, although it was not clear the attacker in that case was transgender. In a speech last week, Mr. Youngkin linked the case to the campaign themes he has aimed at anxious suburban parents.

“What other tragedy awaits Virginia’s children?” he asked.

Mr. Youngkin has also vowed that if elected, he would ban the teaching in public schools of critical race theory, an academic body of thought about the effects of systemic racism that has galvanized conservatives around the country. It is generally not introduced until college and is not part of classroom teaching in Virginia. 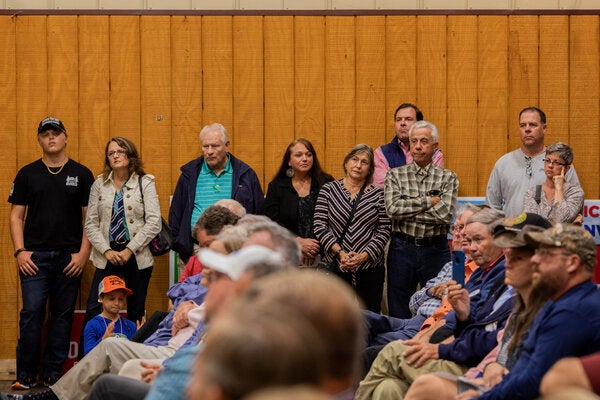 At a parent-focused rally in Winchester, Va., supporters listened to Mr. Youngkin.  Credit... Jason Andrew for The New York Times

Some Republicans have been surprised at the audience their messages have found in Virginia, a state that has steadily trended away from the party in the last decade. Polls have generally put the race in a dead heat between Mr. Youngkin and his Democratic opponent, Terry McAuliffe, a former governor and a former chairman of the Democratic National Committee, but a Fox News survey released Thursday showed Mr. Youngkin pulling away from Mr. McAuliffe, with an eight-percentage-point lead among likely voters, exceeding the poll’s margin of sampling error.

Mr. Youngkin began his campaign by selling himself as a political outsider and businessman who would bring competence and common sense to the governor’s mansion. “I was tired of watching what was happening with folks that have never really run anything,” he said in an interview with Fox Business in February. Early on, he nodded to the exaggerated claims by pro-Trump Republicans that fraud had tipped the 2020 election and established a task force to recruit citizens to help his campaign monitor balloting in Virginia.

He made little secret of his desire to avoid getting dragged into debates over social issues and was secretly filmed by a liberal activist saying that he couldn’t talk about abortion because he would alienate independent voters. But when the debate over critical race theory started consuming conservative media, Mr. Youngkin wasn’t so taciturn.

“Critical race theory has moved into our school system and we have to remove it,” he told Fox News in August.

Increasingly, Mr. Schilling with the American Principles Project and other conservative activists see the Virginia race as a dress rehearsal for the 2022 midterm elections. Those races, they said, are likely to hinge on parents of schoolchildren who believe their public schools have become battlegrounds in the culture wars.

“If Youngkin pulls this out, or even if he outperforms expectations, I think what you’re going to see in 2022 is a Tea Party-like movement centered on families and schools,” Mr. Schilling said.

If Mr. Youngkin prevails, it will be in part thanks to Republicans who decided it did not matter what he believed.

“I don’t know where his heart is,” Mr. Schilling added. “I’m not thinking a lot about it.”