Facebook’s new Portal Go is great for video calls, but not much else

The The Facebook Portal Go is a portable smart display designed to make video calling in your home easier. The irony of a product that purports to bring people together being made by a company whose algorithms often drive people apart is not lost on anyone. Personally, I have friends I will not be enjoying Messenger video calls on the Portal Go with because I unfriended them on Facebook so I wouldn’t need to in real life. But for the rest of my Friends list, the Portal Go has been a surprisingly fun device to use to stay in touch. That time my 76-year-old mother and I competed at eating virtual donuts in an augmented reality Messenger Room — opening our mouths as wide as possible as we bore down on the screen — is definitely one for the memory books. Thankfully, there is no video evidence.

The donut-eating device costs $199 and starts shipping on October 19th. A battery-powered version of Facebook’s 10-inch Portal smart display, the Portal Go has a new form factor and some new tricks. It joins Facebook’s smart display lineup alongside the Portal Mini (8-inch screen for $129), the 10-inch Portal ($179) and Portal TV ($149), and the also-new 15-inch Portal Plus ($349, which replaces the old Portal Plus as the largest screen in the lineup).

The Go still houses Facebook’s excellent wide-angle camera that automatically frames you as you move around as well as those beam-forming microphones that hone in accurately on the voice of whoever is speaking. Fun, interactive AR features that can help keep a kid engaged with a grandparent or give tweenagers hours of fun with their friends are still front and center in the Messenger calling app. And Facebook has built on all those features in this third-generation device, adding a little more fun and a lot more functionality.

As a video calling device, it’s an improvement on previous generations. Three additions — an all-day battery so you can pick it up and move it around, Bluetooth keyboard and headset support for productivity and privacy, and calendar integration for tap and go video calling — make this actually useful for video calls, as opposed to a bit of a novelty.

It’s also as easy to set up and use as the previous versions, much simpler than setting up calling on any of the other smart displays I’ve tested. Plus, there’s handsfree calling using voice with Facebook’s “Hey Portal” voice assistant. A Facebook or WhatsApp account is still required to set up and use the Go, but the option of five different video calling services — BlueJeans, GoToMeeting, Workplace, Webex, and Zoom (with Microsoft Teams coming this year) — in addition to Facebook’s properties, helps you step outside the walled garden somewhat. 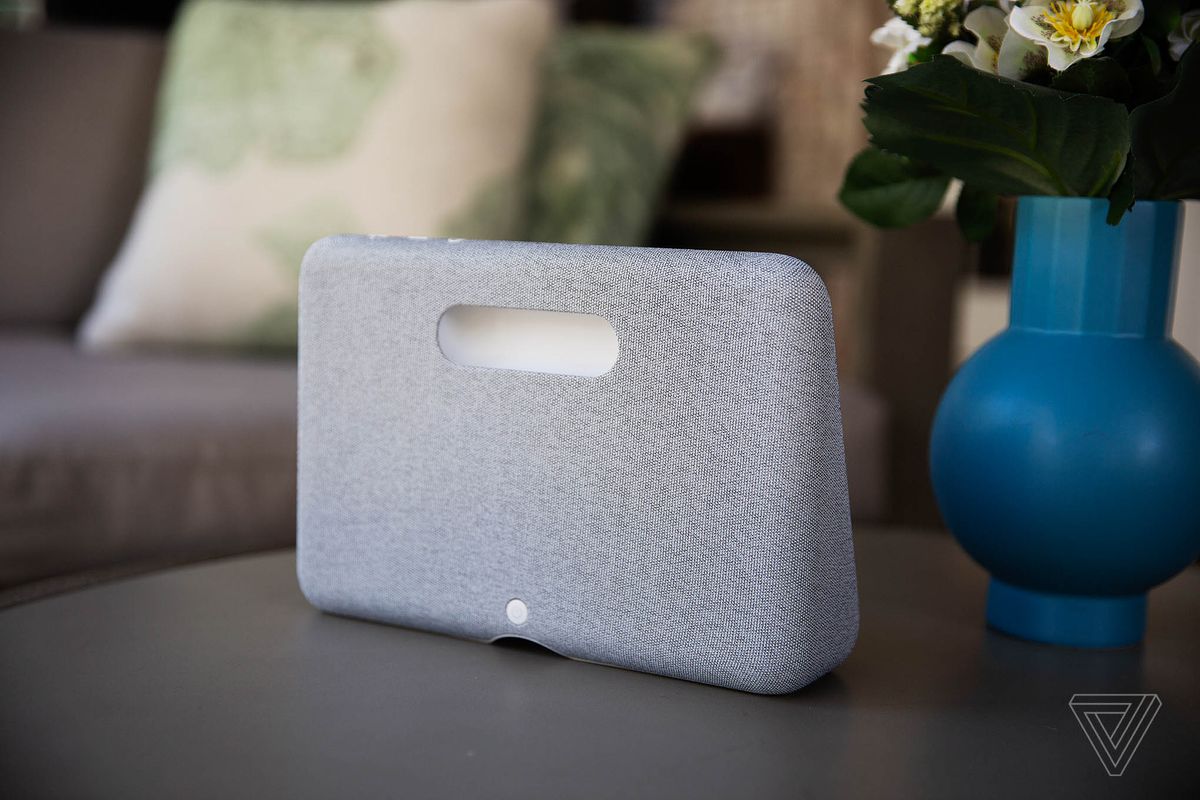 The Portal Go has an integrated carrying handle and three buttons on top for volume control and muting the microphone and camera.

The Portal Go comes with a small USB-C powered charging stand, so it can stay powered or move from room to room. Weighing three pounds and with an integrated handle, it is as easy to walk around with as an iPad and less awkward than a laptop. The Portal Go’s battery has a 40Wh capacity — not far off from what you’d find in a thin and light laptop. It promises 14 hours of music playback and up to five hours of video calling.

With light use (some music streaming, video watching, and a couple of Zoom calls), it lasted an average of 19 hours in my testing. A new, softer design replaces the faux-photo-frame look of the second-gen. Now fabric-wrapped and more triangular shaped for better stability, it looks a lot like a Nest Hub Max, only with less bezel and a bigger fabric base. 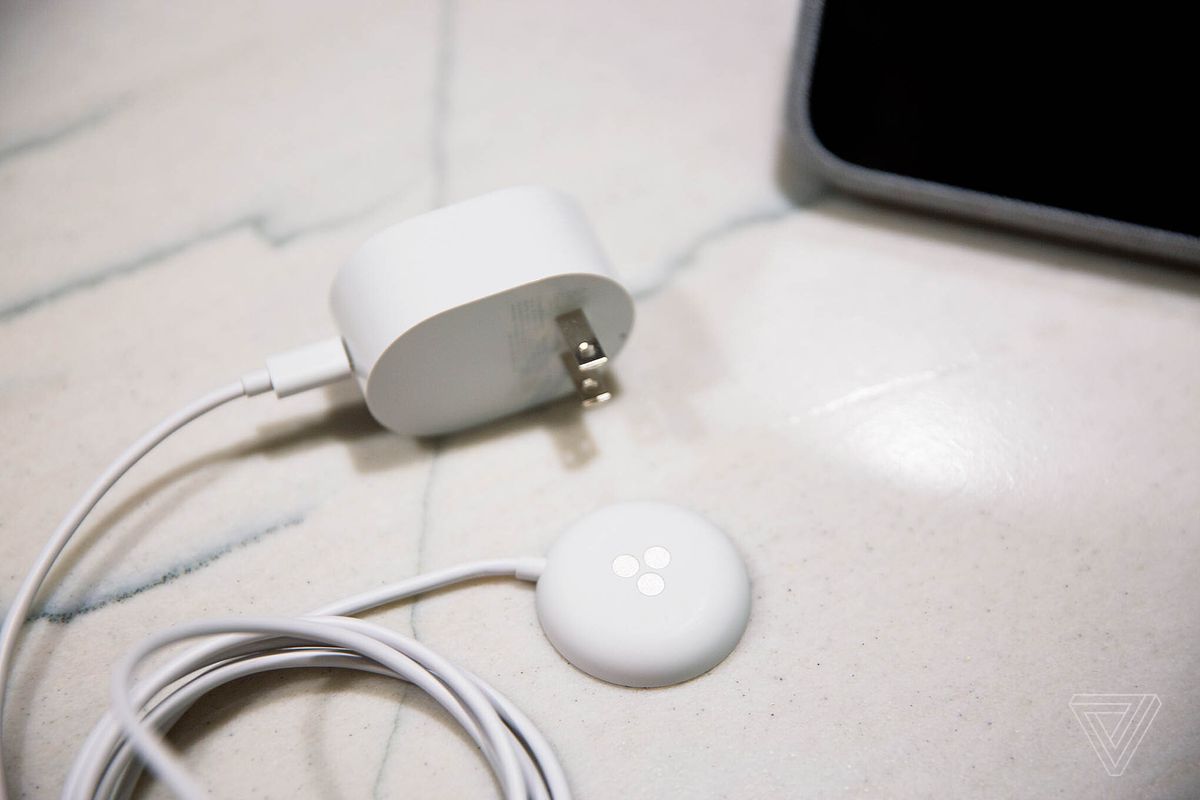 The Portal Go’s charging stand is a small circle that the device sits on top of to charge. There’s a similar shaped cut out on the base.

The new base also houses an improved speaker system; two full-range speakers and a woofer make this a much better, if not spectacular, music streaming device and portable Bluetooth speaker. I was able to take it outside and serenade my chickens at the bottom of the garden with Adele’s newest track, and they fully enjoyed her smooth vocals, dramatic timbre, and perfect pitch. The downside here is the limited number of supported music services: Spotify, Tidal, Pandora, and iHeartRadio is all you get for streaming.

Other hardware tweaks include a new, separate physical camera shutter (similar to the original Portal’s camera cap but better integrated) and a mute button that turns the camera and microphone off. This gives you the option of just having audio on during a call. 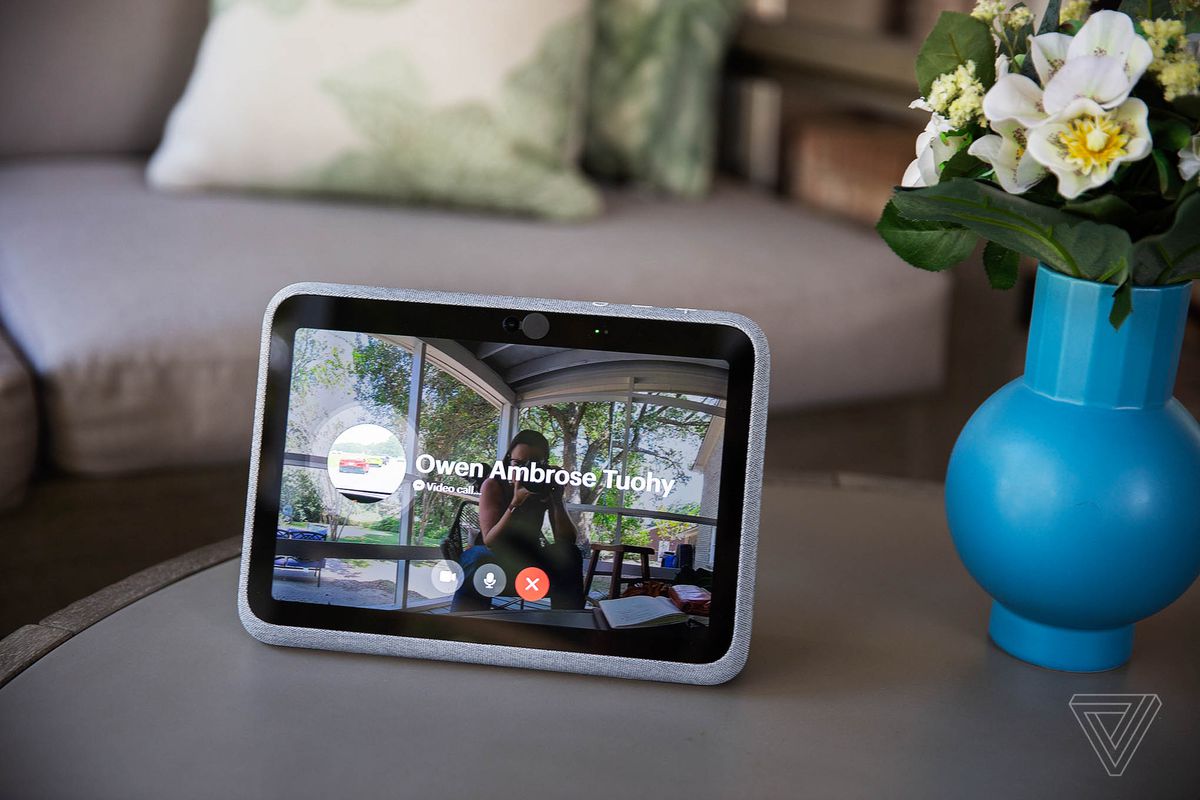 Facebook told me the idea for the Go came from customer feedback — people wanting a device designed for video calling so that when they’re on a work call, they can use their main computer for referencing documents or multi-tasking. When it comes to personal use, being able to “move and place” this screen, as opposed to holding a device like a smartphone or tablet, can help keep a conversation flowing, the company said.

In my testing, this largely held up — it was a smooth experience to sit out on my back porch and perch the Go on a stool to take a Zoom call with eight colleagues while referencing items on my laptop. That would have been tricky to do with any other smart display — involving numerous extension cords. The video quality was excellent, superior to a laptop camera, and the 12-megapixel camera offers decent HDR capabilities, with my bright backyard background only slightly blown out. The four microphones picked up my voice clearly, and the speakers pushed the voices of my colleagues into the outdoor space with no issues.

As nice as it is, I don’t really need to take my work calls on my back porch. And in my use the portability factor came into play with friends and family. Calls between my two teenage children and their grandparents (who were on an older-generation Portal) were a lot easier to initiate when I could pick up the device and take it to where they were. Multi-person calls (four of us on our end and two on their end) also worked better here than our previous attempts on an Echo Show 8, as the camera does a great job of keeping everyone in the frame. You can also hear voices clearly even if they’re moving around (which my kids invariably do). 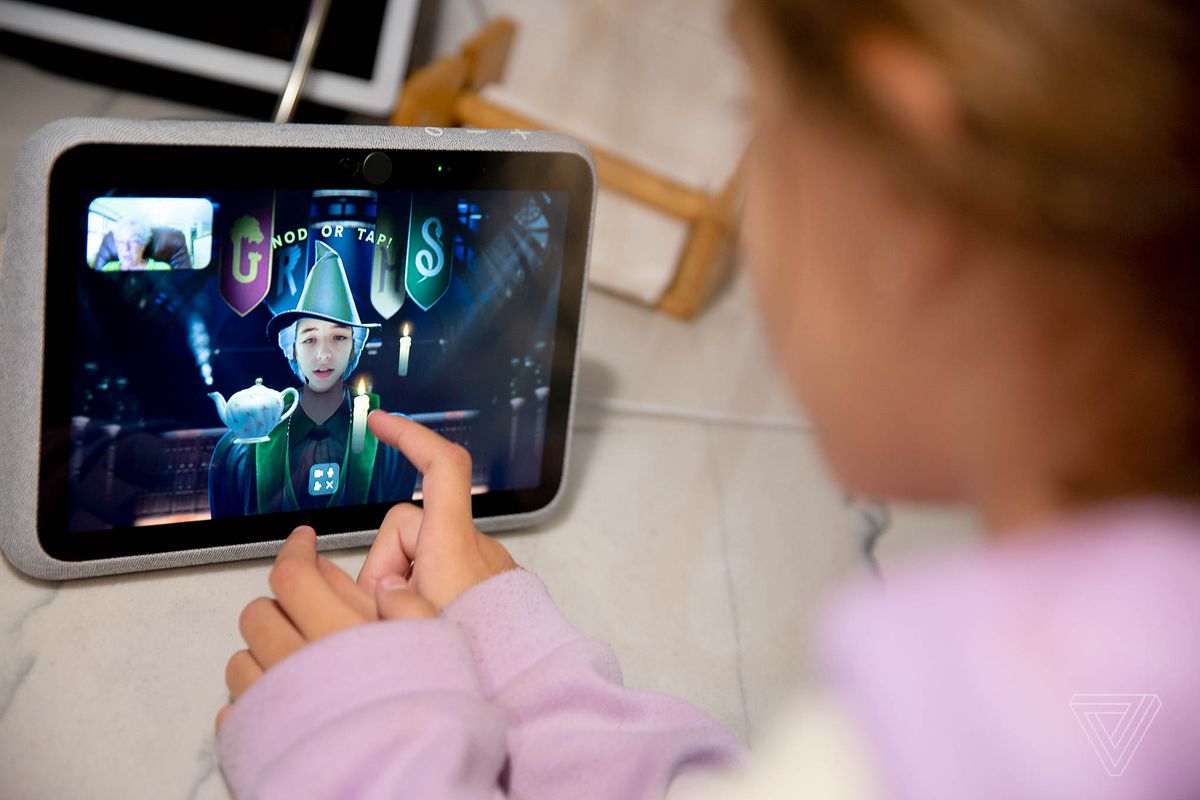 The interactive features on the Portal Go — including a new Harry Potter and the Cursed Child game — helped keep my children engaged on video calls. However, the interface was often confusing.

When considered as a smart display, which is the category most people will put this in, the Portal Go stands out as being the first battery-powered one, and that’s about it. This is not a fully featured smart display, chiefly because of a lack of support for video streaming services (CBS News and the Food Network are the only built-in apps, Netflix, YouTube, and SlingTV can be accessed through the built-in web browser — but no Prime Video, HBO Max, or Hulu).

The Go also doesn’t do anything very smart. While you can use the built-in Alexa voice assistant to do most of what Alexa can do on an Echo Show (including calling up video feeds from Ring security cameras), there is no support for devices outside of the Alexa ecosystem and the Alexa touchscreen interface is pretty useless. As a smart display, this has limited use. 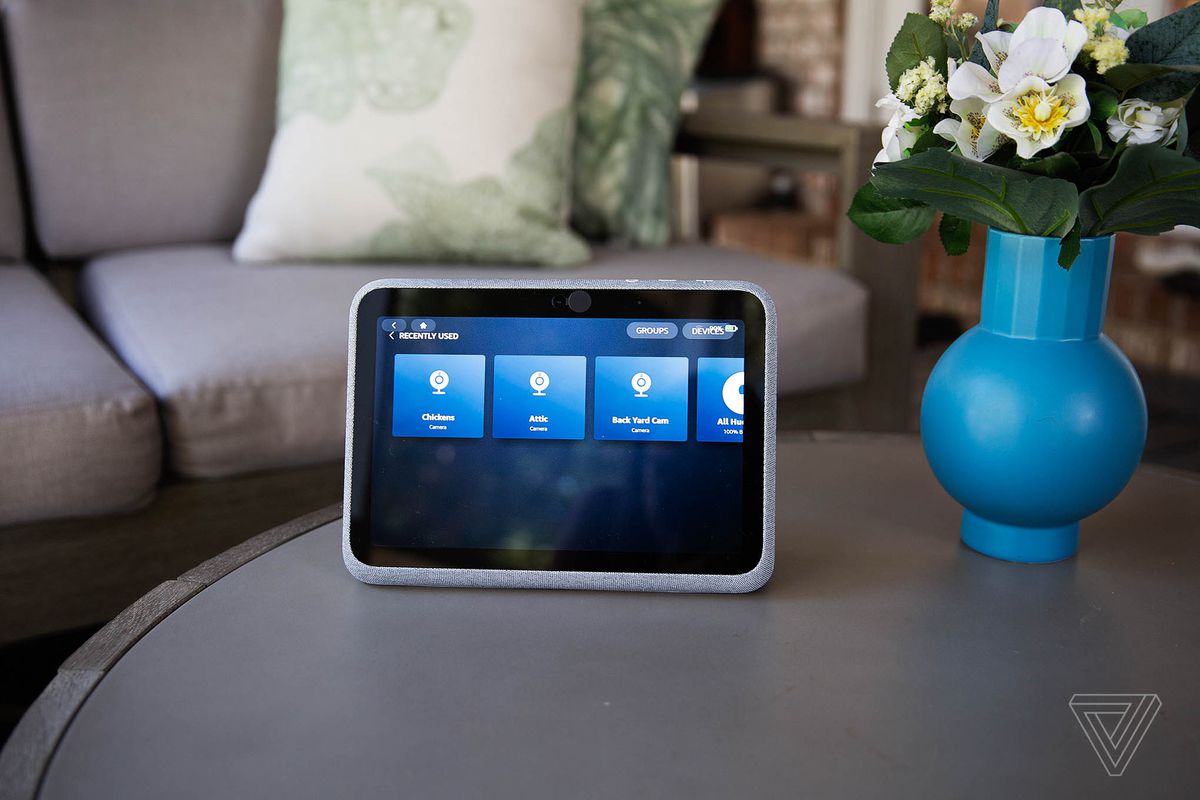 As a smart home controller the touchscreen on the Portal is very limited. You can only access the Alexa app and the touch interface is clunky and difficult to use.

It’s not alone, though. I’ve tested virtually every smart display available, and my feeling is it’s a category searching for a purpose. Smart displays try to do too much and subsequently aren’t very good at any one thing: not great music-listening devices, not an excellent touch interface, not well-designed alarm clocks, and not very good at being a family hub. At best, they’re excellent digital picture frames — although the Portal isn’t great at that. You’re limited to your Facebook or Instagram photos or to importing pictures from your phone using the Portal app, which is just a bit too much work.

This multi-tasking is not something we really need from smart displays. Mobile devices that do everything are useful when we’re out and about, but we don’t need so much all-in-one functionality in the home, especially when a device isn’t very good at any particular task. What we need in the smart home are devices that do what they should do and do it well. I’m happy to have my dishwasher wash dishes and my oven cook the food, so I’m fine if my “video phone” isn’t also a hard-to-use smart home controller and sub-par entertainment device.

I’m not saying I wouldn’t like it if it could do it all really well, but that isn’t the case here — or with any smart display. This is a great video calling device, and that’s about it. A couple features make it a better one than competitors like Amazon and Google. Firstly, you can call the Portal from the Portal app on your smartphone — making it easy to “phone home,” just like an old-fashioned landline. Secondly, you can set up multiple Facebook or WhatsApp profiles (up to four) and protect them with a pin, so everyone has their own contacts to call. Plus, a Household Mode lets you manage access to certain apps so your seven-year-old can still call Grandma, but doesn’t accidentally Zoom your boss at bath time. Multi-user support is tricky to do on other smart displays and flat out not possible with other good video calling devices, such as an iPad. This makes the Go more like a cordless video phone for your home, something anyone in a household can pick up and use.

Whether you want a Portal Go in your home will largely come down to the answers to two questions: Are you comfortable with a device from Facebook in your home, and do you want a dedicated video phone for work or personal calls? If the answer to both those questions is yes — the Portal Go may be a good device for you. If you are more interested in a smart display that easily integrates with your smart home, acts as a second TV screen, and works in a multi-room music audio system, a Nest Hub from Google or an Echo Show from Amazon will fit your needs better.