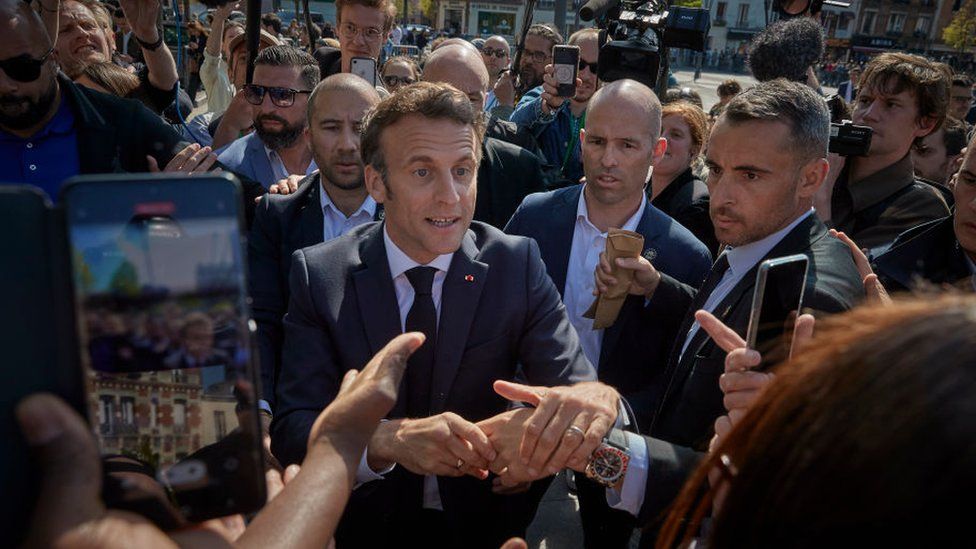 The day after he won the first round of this election, Emmanuel Macron found himself in a shouting match with a dental assistant.

To be fair, only one of them was actually shouting and it wasn't Macron, but the exchange between them, in the old mining town of Denain, reveals the trait that propelled the French president to power five years ago. It's the very same trait that has set many voters against him now.

Elodie, the dental assistant, was furious. She shouted about the president's "insulting" language in describing those who remained unvaccinated against Covid.

Macron told her she had taken his words the wrong way. Elodie shouted about taxes and rising prices.

He said he'd lowered taxes and she wasn't being fair.

"You've lowered taxes?" she responded, incredulous. "Have you been to the petrol station yourself? How much do you earn each month?"

"But it's important I explain," Macron said.

The French president has always believed he has the answer to the country's problems. And that, if only he can explain his thinking to others, they will see that too.

That self-belief has led to many long speeches, a tough approach to protesters - and a perception among some people that Macron just won't listen.

Even before he was elected, he radiated a kind of single-minded evangelism about his project for France. How else could a 39-year-old running his first election campaign become president in the first place?

Alain Minc, an influential political adviser and early mentor to Macron, tells the story of meeting the future leader in the early 2000s.

"I'll tell you the first words I exchanged with him. He came to visit me, when he was a young inspector of finance, and I [asked him]: 'What will you be in 20 years from now?'. Macron answered, 'I'll be president'. I was stunned."

Without the backing of any established party or structure, he was initially written off by many people as too young and too inexperienced; a "champagne bubble" liable to pop before polling day.

One fellow minister in France's Socialist government mocked Macron's new movement - whose members were nicknamed "the Marchers" - by posting a video of the launch on social media, set to a song titled I Walk Alone.

That's not how it turned out.

Macron was initially dismissed as inexperienced in 2017

Macron had a fair amount of luck in his first election campaign.

His rivals from the main Socialist and Republican parties left a good deal of political ground in the centre of politics - the space he hoped to occupy. And the Republican frontrunner, François Fillon, became embroiled in a financial scandal during the campaign.

But Macron's vision for France was clear, and it was new, and it was delivered with energy and passion.

At his campaign rallies, the future leader seemed to give himself completely to the moment. Hoarse with emotion, almost Messianic, he would shout into the auditorium, head thrown back, arms wide, telling his fans he loved them, needed them. It was rock star politics.

The impression was that a new wind was blowing through French politics, bringing a promise of inclusion and democracy. All driven by one man.

Before formulating a political programme, En Marche began by carrying out 25,000 interviews with voters across the country, going door-to-door and asking people two questions: what works in France, and what doesn't work?

But political biographer Marc Endeweld says that, despite the image of a fresh, more horizontal democracy, Macron was always the one with the power.

"You have to realise that, in the end, En Marche is something very vertical," he told me at the time. "There isn't really a campaign manager. Emmanuel Macron has compartmentalised his relationships, and he has an extremely personal conception of power."

Race for the French Presidency

Emmanuel Macron had two advantages the first time he ran for office that he can no longer count on this time.

Back then, he was a new face in a tired political scene - young and relatively unknown. And his vision and promises were also untested against France's tough political realities.

To be fair, he was accused from the start of being vague about his positions, of being all things to all people, of saying "everything and nothing".

"When things are vague," Socialist party member Martine Aubry remarked at the time, "there's usually something hiding there that will bite you".

Macron's mission, to break up the old parties of government and make a new centrist party from the pieces, meant bridging the traditional divide in French politics and attracting voters from both sides.

He had liberal views on social issues - gay rights and gender equality, for example - which drew the support of the left; but he was also an economic liberal, who believed in loosening the constraints on business to get the economy going, and that appealed to many voters on the right. That kind of "double-liberal" position was new for France.

He won the 2017 election, as he planned, with the support of centrist voters on both sides, united behind a liberal, pro-European president. But after five years in power, his support has shifted to the right, and he's facing deep disappointment from voters on the left.

Macron has created jobs, spent billions to support workers and businesses through Covid, and he has subsidised both gas and petrol prices in France over the past six months.

But his core belief is that economic reform, to free up business and demand more from workers, is the way to relieve poverty and fund the kind of social policies that left-wing voters hold dear. Rather than bridging old political and class divisions, that approach has opened them back up.

And some key decisions, taken soon after he became president, have become emblems of his alleged "betrayal" of France's working class - and earned him the nickname "President of the Rich".

His decision to slash the wealth tax for France's richest citizens still burns in the minds of many left-wing voters. More than a fiscal policy, they say, it seemed to signify where his real priorities lay, and showed contempt for their vote.

It's these disillusioned voters that Macron is now chasing in places like the old mining town of Denain, ahead of his run-off with far-right leader Marine Le Pen this week.

And the argument he had with Elodie, the dental assistant, is the same argument he's been having with his opponents since he came to power - from the unions to the yellow-vest protesters, the gilets jaunes: France has to make money in order to spend it.

The charge that he's a president of the rich does not sit well with the story Emmanuel Macron likes to tell about himself.

Five years ago, during his first presidential campaign, a journalist brought up Macron's background as an investment banker, questioning whether he could attract working-class votes.

France's future leader unleashed an impatient tirade against the idea that he was part of a privileged elite.

"I was born in a provincial town, in a family that had nothing to do with the world of journalists, politicians or bankers," he expostulated, clearly annoyed. "It's with a lot of pride that I say I am the candidate of the working and middle classes."

He points out in his autobiography that his grandparents were a teacher, a railway worker, a social worker and a road engineer.

His maternal grandmother, Manette - the teacher - was especially important to him, introducing him to literature and culture, and teaching him how to think.

But she also gave him something else he could use in his bid for power. Manette's own mother had been illiterate, and the story of her descendant making it to the Élysée Palace was a romantic tale - far more romantic than the tale of a neurologist's son who went to private school, and ran for office after a stint with an investment bank.

The truth is that Emmanuel Macron's family history is a story of bridging social divisions, just as he would later try to do in politics.

Macron's marriage to his former drama teacher, Brigitte, was not publicised until he ran for power

And the unwavering belief in his own vision and analysis he brought to the presidency is also there to see in his personal life. Macron's wife, Brigitte, was once his drama teacher - 24 years his senior and, at the time, married with three children.

By the time he had left her school at the age of 16, he had vowed to marry her.

"We'd call each other all the time and spend hours on the phone," she told a French documentary. "Bit by bit, he defeated all my resistance, in an amazing way, with patience."

It's an unusual love story, and one of Macron's biographers, Anne Fulda, says it was a story the couple chose not to publicise until he ran for power.

Back in 2017, Fulda told me that Macron wanted to give the idea that "if he was able to seduce a woman 24 years his senior in a small provincial town, despite prejudices, despite people's looks, despite mockery, he can conquer France in the same way".

Two things he counted on last time are gone: he's no longer a fresh face in politics, and his programme is no longer a vague and untested vision for France.

One thing that is the same this time around is his opponent in the run-off, France's far-right leader, Marine Le Pen, although this time the race will certainly be closer.

"If I take the same criteria," he told me this week, "more Europe is a success, less unemployment is a success too; less extreme right - it's a failure."

The irony is that it was Emmanuel Macron who helped normalise Marine Le Pen's party and bring her into the political mainstream when, five years ago, he reframed politics as a one-on-one battle between his pro-business, pro-European vision, and her nationalist, protectionist one.

That battle is still being fought.

The wild card this time around is the growing number of voters who feel less and less clear about who would be worse for France: the far-right leader who talks of change, or the centrist leader who doesn't listen.

Even before his protégé was first elected, Alain Minc predicted that Macron would be "very authoritarian, very political, very presidential".

"When people say he's too young, he'll be a soft president - pah!"

Five years on, even Mr Minc says the president's style is "too Napoleonic".

Emmanuel Macron has spent the past couple of weeks reaching out to his detractors, rowing back on plans for pension reform, and promising to put ecology at the centre of his programme.

"To be re-elected, after managing the country for five years, would be a tremendous success," says Minc. "I hope that tremendous success will not increase his trust in himself. I hope he will change, but I doubt it."