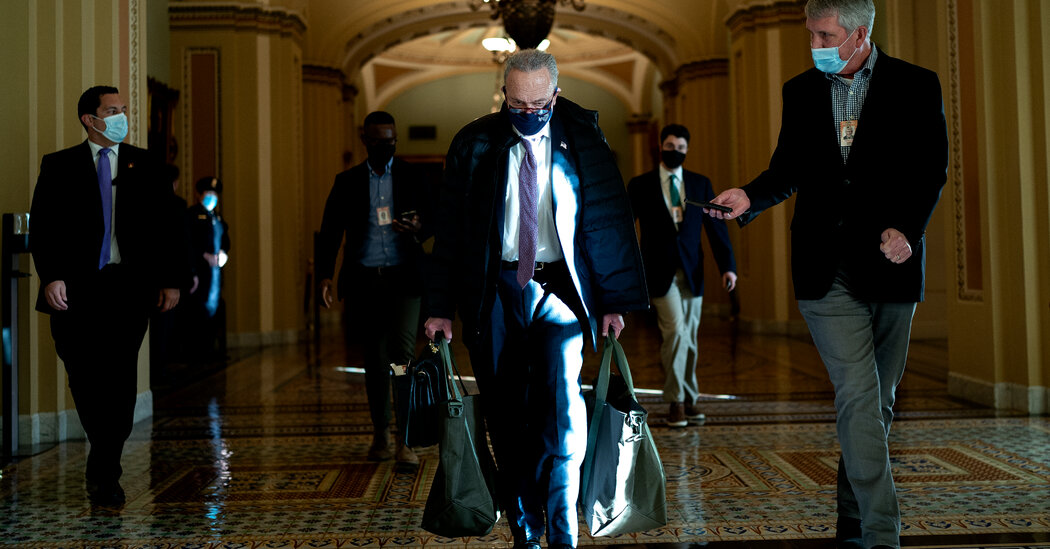 The measure would allow the government to continue borrowing to finance its obligations without further action by Congress until after the 2022 midterm elections. 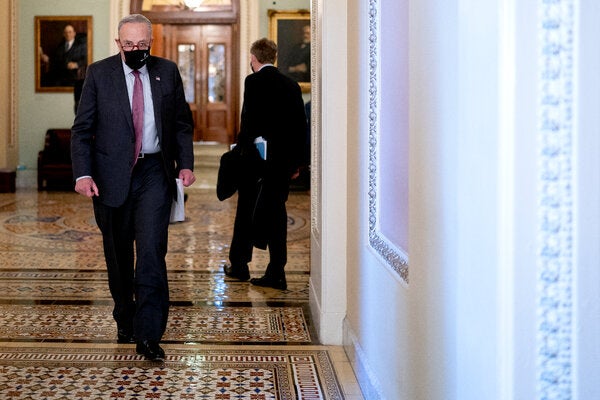 “The American people can breathe easy and rest assured there will not be a default,” said Senator Chuck Schumer of New York, the majority leader. Credit... Stefani Reynolds for The New York Times

WASHINGTON — Congress gave final approval early Wednesday to legislation that would raise the debt ceiling by $2.5 trillion, moving over nearly unanimous Republican opposition to stave off the threat of a first-ever federal default until at least early 2023.

Democrats were united in support of the measure, which passed the Senate 50 to 49 along party lines on Tuesday afternoon and then cleared the House in a 221-to-209 vote shortly after midnight on Wednesday. Republicans opposed the legislation en masse, with only one, Representative Adam Kinzinger of Illinois, voting in favor. The bill now heads to President Biden, who was expected to quickly sign it.

The swift action came a week after party leaders announced a deal to establish a one-time fast-track process to increase the debt ceiling with a simple majority vote, instead of the 60 votes needed to move most legislation through the Senate.

The votes occurred with little time to spare before a potential default, which would be catastrophic for the national economy. The Treasury Department had warned that it would be unable to pay the nation’s bills soon after Wednesday, and the agency is currently using so-called “extraordinary measures,” a series of fiscal tools to delay the threat of a default.

“The full faith and credit of the United States should never be questioned,” Speaker Nancy Pelosi of California said before the House vote. “The health of our economy should never be threatened. The financial security of our families must never be gambled.”

Senator Chuck Schumer of New York, the majority leader, said on Tuesday that the $2.5 trillion figure would be enough to punt the threat of a default past the midterm elections next year, an assessment shared by the Treasury Department, according to a person familiar with its internal estimates. The debt limit, which covers debt incurred by administrations from both parties, is currently set at $28.9 trillion.

“The American people can breathe easy and rest assured there will not be a default,” Mr. Schumer said in a speech on the Senate floor. He thanked Republicans, including Senator Mitch McConnell of Kentucky, the minority leader, for their help in setting up the process and resolving a must-pass piece of fiscal legislation before the end of the year.

A handful of Republicans, while opposed to the debt limit increase, ended their party’s monthslong blockade of debt limit legislation by voting last week to create the expedited process. Republicans had spent months refusing to allow Democrats to take action on long-term legislation raising the debt ceiling, using the filibuster to stall any action.

“The way this Congress has been polarized, I don’t know if I expect Republican votes for lunch, never mind on something like this,” said Representative Jim McGovern of Massachusetts, the chairman of the Rules Committee.

For Democrats, addressing the debt limit gives senators more time to focus directly on muscling their marquee $2.2 trillion social safety net, climate and tax package through the Senate before Christmas, even as some senators acknowledged that such a timeline might not be feasible.

But even as they eyed other legislative ambitions, some Democrats argued that the contortions to raise the debt ceiling demonstrated why Congress should dispose of the process altogether, rather than periodically running up against potentially catastrophic fiscal cliffs, only to set up new ones in the future.

“I think it’s very clear that this debt ceiling process has got to go,” said Senator Ron Wyden, Democrat of Oregon and the chairman of the Finance Committee. “It is now a tool for politicians for political purposes, and it just defies common sense.”

Other Democrats suggested that the convoluted workaround was further evidence that the filibuster itself should be scrapped, or that similar exceptions should be made for other Democratic priorities.

“We have decided that we must do it for the economy, but not for the democracy,” Senator Raphael Warnock, Democrat of Georgia, said in a speech on the Senate floor. Mr. Warnock argued that a similar special process should be created for passing voting rights legislation that has been filibustered by Republicans.

But creating such a process would take the support of at least 10 Republicans, and only one has been willing to join Democrats in support of taking up a voting rights measure. By contrast, 14 Republicans joined Democrats last week in voting to allow the Senate to take up a bill permitting the debt limit to be raised with a simple majority vote.

On Tuesday, Republicans were eager to have Democrats go on the record in support of the increase. Republicans could cite those votes in the future as they seek to criticize Democrats for excessive spending and adding to the national debt.

“Since taking control of the House, the Senate and the White House at the beginning of this year, the majority has made repeated decisions to spend massive amounts of taxpayer dollars with only Democratic votes,” said Representative Tom Cole, Republican of Oklahoma. “With that power also comes responsibility to effectively govern, and the majority has failed to do so.”

What is the debt ceiling? The debt ceiling, also called the debt limit, is a cap on the total amount of money that the federal government is authorized to borrow via U.S. Treasury bills and savings bonds to fulfill its financial obligations. Because the U.S. runs budget deficits, it must borrow huge sums of money to pay its bills.

When will the debt limit be breached? The Treasury had warned that the government would have become unable to pay its bills in mid-December. In the early hours of Dec. 15, Congress passed legislation to raise the limit by $2.5 trillion and stave off the threat of default until 2023. The bill now goes to President Biden, who is expected to sign it.

Why does the U.S. limit its borrowing? According to the Constitution, Congress must authorize borrowing. The debt limit was instituted in the early 20th century so the Treasury did not need to ask for permission each time it needed to issue bonds to pay bills.

What would happen if the debt limit was hit? Treasury Secretary Janet Yellen told Congress that inaction on raising the debt limit could lead to a self-inflicted economic recession and a financial crisis. She also said that failing to raise the debt ceiling could affect programs that help millions of Americans, including delays to Social Security payments.

In a floor speech on Tuesday, Mr. McConnell made no mention of the deal he struck with Mr. Schumer to allow the increase to occur, but he noted that the debt ceiling would be raised solely with Democratic votes in the Senate. He also denounced Mr. Biden’s social safety net, climate and tax package, warning that it would exacerbate inflation and lead to the accumulation of more debt.

“If they jam through another reckless taxing and spending spree, this massive debt increase will just be the beginning,” Mr. McConnell said. “More printing and borrowing to set up more reckless spending to cause more inflation, to hurt working families even more.”

But Mr. McConnell has also fielded criticism from his right flank for allowing Democrats to steer the country away from a fiscal catastrophe.

“I’m sure this vicious tactic, the one used here, has not seen its last use — far from it,” said Senator Mike Lee, Republican of Utah. “With a blank check and a new special procedure, Democrats are able to raise the debt ceiling by whatever amount they deem necessary to accommodate their destroy America bill.”

Former President Donald J. Trump railed against Mr. McConnell in a series of statements over the weekend, charging that the senator “didn’t have the guts to play the debt ceiling card, which would have given the Republicans a complete victory on virtually everything.”

On Monday, Kelly Tshibaka, a hard-line conservative challenging Senator Lisa Murkowski, Republican of Alaska, pledged that she would not support Mr. McConnell if elected in 2022, citing his role in the debt ceiling process.

Ms. Murkowski voted to set up the fast-track maneuver, and she appeared unbothered by the prospect of having it used against her.