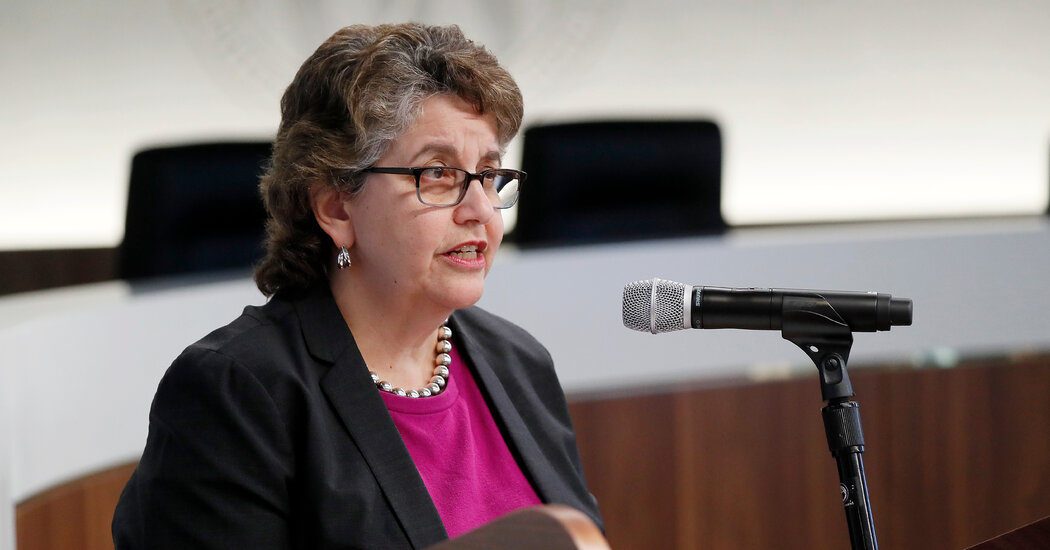 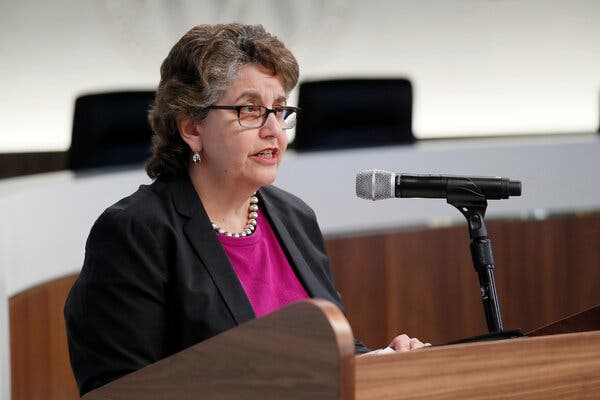 Here is the inside story of how Democrats, after a decade of defeats at the nation’s top campaign watchdog, are trying to enforce election laws in part by losing on purpose in federal court

. Ellen L. Weintraub, a Democratic commissioner since 2002, is the chief architect behind the strategy. Credit... Paul Morigi/Getty Images for Pen America June 8, 2021 WASHINGTON — A funny thing keeps happening in federal court. An arm of the government has not been showing up to defend itself against lawsuits. Some judges appear confused, and less than amused, by the unusual absences. “It is necessary for the agency to pay attention to this case,” one exasperated district court judge wrote in March. Yet when the judge set another court date, in May, the agency in question, the Federal Election Commission, didn’t show up again. It was not an accident. For more than a decade, Democrats seeking more robust enforcement of election laws and transparency measures have been routinely routed at the F.E.C., the nation’s top campaign watchdog agency. They have complained bitterly that Republicans have weaponized the commission’s bipartisan structure — there are three commissioners allied with each party — to turn it into a toothless, do-nothing bureau. Now, the Democratic commissioners have stealthily begun to strike back by leveraging some of the same arcane rules that have stymied enforcement efforts for years — namely, that a bipartisan vote is necessary to do almost anything — to make the agency do even less. The goal appears to be to take a commission widely seen as dysfunctional and create further deadlock, compelling federal courts to fill the breach when it comes to policing federal election law. “I think of it as a desperate cry for help,” said Adav Noti, a former lawyer at the F.E.C. who is now a senior director at the Campaign Legal Center, a nonpartisan watchdog group that is among those that have sued the F.E.C. If successful, the gambit could have far-reaching implications for future campaigns and for pending F.E.C. complaints from the 2020 election, like one that accused former President Donald J. Trump’s campaign of laundering hundreds of millions of dollars through limited liability companies to conceal whom his campaign was ultimately paying. The chief architect behind the strategy is Ellen L. Weintraub, a Democratic F.E.C. commissioner since 2002, who described it as something of a last-ditch effort after years of watching enforcement actions become sidelined in 3-3 split decisions. “I’m using the small amount of leverage that I have,” she said. “It’s not a lot.” Here is what has been happening behind closed doors, according to people familiar with the commission’s private executive sessions: First, the Democrats are declining to formally close some cases after the Republicans vote against enforcement. That leaves investigations officially sealed in secrecy and legal limbo. Then the Democrats are blocking the F.E.C. from defending itself in court when advocates sue the commission for failing to do its job. Lee E. Goodman, a Republican former F.E.C. chairman who stepped down in 2018, said the tactic amounted to “sandbagging federal judges” by making them believe deadlocked cases are unresolved. “While we can admire it in its creativity, it fundamentally rests on a dishonesty,” he said. The combination of moves takes advantage of existing provisions in campaign law to essentially open the door for outside advocacy groups to directly sue campaigns in federal court. In fact, it is already happening, including in one case involving a group that spent money supporting Senator Joni Ernst of Iowa and that is accused of improperly existing as a nonprofit to shield its donors from public disclosure. “If I don’t believe the case ought to be dismissed, why would I vote to dismiss?” Ms. 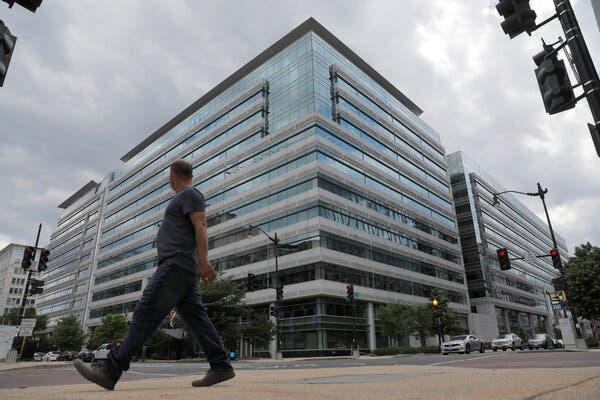 . “I’m just trying to get the law enforced.” Image The Federal Election Commission offices in Washington.  Credit... Andrew Kelly/Reuters The Republican commissioners are livid. Commissioner Sean J. Cooksey has warned his Democratic colleagues that they are going down “a very, very dark road” and revealed in a recent memo that there are now 13 such unclosed cases, calling them “zombie matters — dead but unable to be laid to rest.” Commissioner Trey Trainor said in an interview that the Democrats were “poisoning the well” at the agency with a tactic that he said was “an abuse of the process.” “They are on the losing end of the 3-3 votes, and they think that by concealing the information from the courts, they’ll get a different ruling,” Mr. Trainor said. Ms. Weintraub said: “I didn’t bust the norms of the agency. The other side did.” The escalating episode of procedural warfare comes as Congress is actively reconsidering the structure of the F.E.C. itself, which last year went for a long stretch without having enough members for a quorum. Democrats pushed sweeping election legislation through the House this year, but the bill has stalled in the Senate. Senator Mitch McConnell of Kentucky, the Republican leader, has made loosening campaign finance rules a priority in his career, and the legislation lacks unanimous support from Democratic senators. Sign Up for On Politics With Lisa Lerer: A spotlight on the people reshaping our politics. A conversation with voters across the country. And a guiding hand through the endless news cycle, telling you what you really need to know. Broadly, Republicans see the spending of money in politics as protected free speech, and their hands-off approach to regulations has largely benefited from the F.E.C.’s deadlocked status quo. Some advocates of stricter enforcement hoped a new dynamic could spur a reconsideration of the commission’s current structure. “If they break it so much that federal courts are intervening, that would seemingly be an intolerable situation to Mitch McConnell,” Mr. Noti said. Campaign operatives have for years operated under the assumptions that the F.E.C. would be unlikely to crack down on anything but the most egregious violations and that, in the rare cases it does, the fines imposed would amount to only a nuisance. “It was open season” for politicians, said Ann Ravel, a Democrat who served on the commission from 2013 to 2017, “because they knew the F.E.C. was never going to enforce anything.” But the new maneuver drastically accelerates and smooths the way for outside groups to pursue campaign finance challenges in the federal courts — a far less predictable and partisan place. Instead of waiting for years for the commission to deadlock, and then filing long-shot lawsuits to appeal the F.E.C.’s split decision, the law allows advocates to sue the commission far sooner for defaulting in its basic duties. Then, because the agency isn’t defending itself in those lawsuits, groups have a mostly clear path to sue candidates and campaigns directly. “We’re abrogating our authority to the courts,” lamented Mr. Trainor, a Republican commissioner who was appointed last year. Image Commissioner Trey Trainor said that the Democrats were “poisoning the well” at the agency with a tactic that he said was “an abuse of the process.” Credit... Caroline Brehman/CQ Roll Call, via Associated Press Which, for the Democrats, is precisely the point. 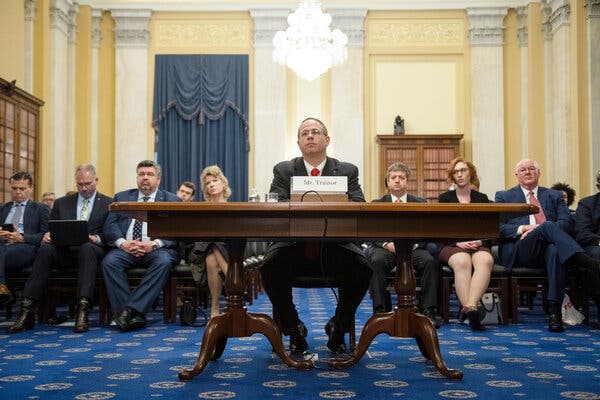 “It is not like I think the courts are automatically going to come to the same decision I would come to,” Ms

. Weintraub said. “But I think it’s got a better shot.” The tactic will work only as long as all three commissioners in the Democratic bloc agree not to close an investigation and not to defend the F.E.C. in court on a particular case. Of the three, only Ms. Weintraub would agree to an interview. The other Democratic-aligned commissioners are Shana M. Broussard, who is the current chair and was appointed last year, and Steven T. Walther, who was appointed in 2006 and who F.E.C. insiders say has been largely checked out of the day-to-day functioning of the agency. Some of the sharpest critics of the F.E.C.’s dysfunction described the Democratic tactic as something akin to a least bad option. “Campaign finance laws are routinely ignored and corruption is rampant,” said Stuart McPhail, senior litigation counsel at Citizens for Responsibility and Ethics in Washington, which regularly files F.E.C. complaints. “This path is the best in a broken system.” It is not just a theoretical debate about tactics; some campaign finance cases are already playing out in court. In one current case, lawyers for a nonprofit, Iowa Values, that was accused of failing to register as a political committee are seeking to have the lawsuit against the group dismissed, accusing some F.E.C. commissioners in a memo of “taking their marbles home when they lose” and not closing cases. There is another important, if obscure, legal factor in play. Currently, the federal courts give almost total deference to the F.E.C. when it decides not to pursue cases — even in the event of a 3-3 split — if commissioners cite “prosecutorial discretion” in their reasoning. Such cases are, more or less, not eligible for legal appeals. “All the Republican commissioners need to do is include the magic words ‘prosecutorial discretion’ and a court will then decline to review the action,” said Paul S. Ryan, vice president for litigation at Common Cause, who has regularly filed F.E.C. complaints. Indeed, Republican commissioners recently deployed that exact phrase — twice — in dismissing an investigation into whether Mr. Trump violated election laws with the payment of $130,000 to the pornographic actress Stormy Daniels in 2016 to keep her from publicly discussing her relationship with him. The twist in the raft of unclosed cases is that they remain formally under active investigation and are thus confidential, meaning that Republican commissioners are unable to tell the courts what has happened and why. In other words, they can’t cite their own “prosecutorial discretion.” “We can’t even tell the court under seal that we’ve handled a particular case,” Mr. Trainor said, calling the Democratic maneuver “completely unethical.” “In all of the cases where we’re not showing up, the judges are getting a one-sided story.” Ms. Weintraub said she hoped that leaving cases open would spur compromise, however unlikely that seems. “I’m hoping that my colleagues aren’t going to be quite so obstinate,” she said. “Maybe this provides some incentive for us to go back to the drawing table.”