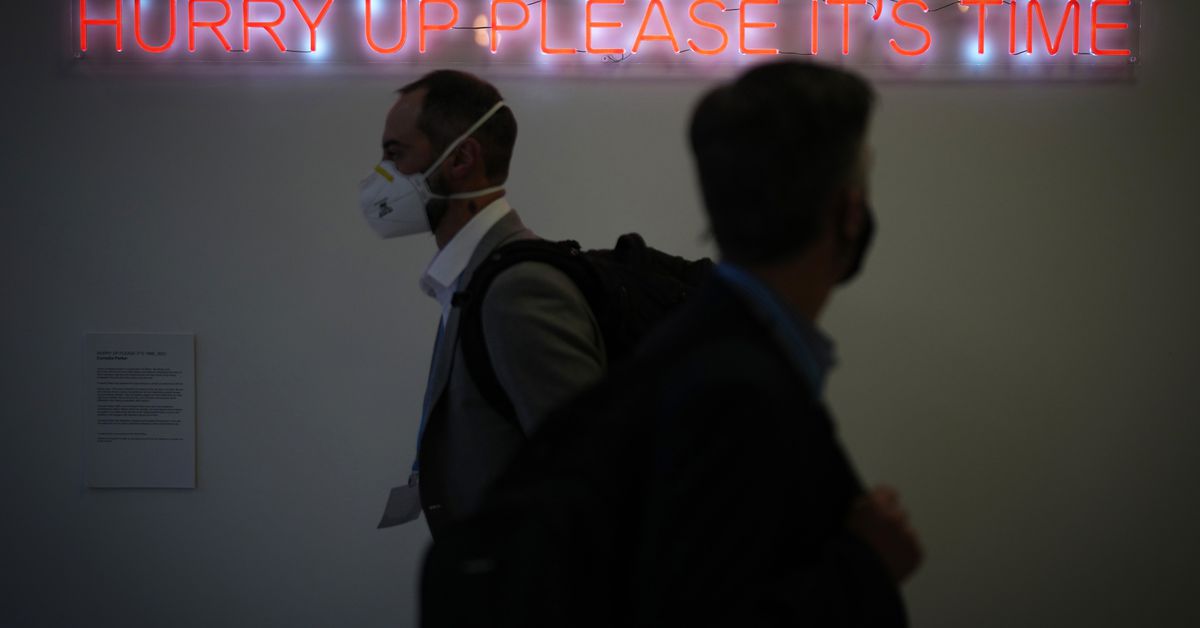 At high-profile climate negotiations in Glasgow, rich nations stuck poor nations with a big bill. Wealthy countries responsible for the most planet-heating pollution have reneged on commitments to help developing nations adapt to a warming world.

That means delegates and activists from the places most vulnerable to climate change will wind up paying the price back home after leaving the United Nations climate summit that closes today. They’ll need to scrounge together funds for new infrastructure that can safeguard them from rising sea levels, devastating droughts, or monstrous storms — or suffer the losses of living without it.

“We are failing people,” says Harjeet Singh, a senior advisor on climate impacts for the Climate Action Network International, a group of more than 1,500 NGOs across the world. “We are failing people who expect so much from their leaders, from this process. And what we are suffering around the world is because of 30 years of inaction.”

A big goal going into the Glasgow summit, called COP26, was to get wealthy nations to fulfill an old promise. They agreed 12 years ago during another climate conference in Copenhagen that by 2020, they would funnel $100 billion a year to climate action in developing nations. That hasn’t happened, the final text of Glasgow agreements notes “with deep regret.”

Early on in negotiations, a bloc of negotiators from Africa and about two dozen other developing nations called on affluent countries to provide at least $1.3 trillion a year for climate mitigation and adaptation by 2030. Others asked for $500 billion over five years, and that half of finance go towards adaptation. Ultimately, a deal was struck at the summit to at least double finance specifically for adaptation.

Rich countries have, so far, only shelled out about $80 billion a year in climate finance. And just a quarter of finance flows into efforts to adapt to climate change. Historically, most money has flowed into helping developing nations cut greenhouse gas emissions through things like switching to renewable energy or promoting energy efficiency. That’s important, of course. But with climate change already supercharging storms, wildfires, droughts, and other disasters, finding ways to adapt is becoming more urgent.

“The reality is that the genie’s already out of the bottle,” says Saliha Dobardzic, a senior climate change specialist with the Adaptation Fund, which is administered through the World Bank and gives climate grants to developing nations. The fund, which pre-dates the $100 billion climate finance target, raised a record $356 million in new pledges during COP26. “Climate change impacts are being seen and experienced everywhere to some degree — and coping and living and adapting to that requires resources.”

Adaptation might look like homes retrofitted to better weather the next storm, raising them above floodwaters or insulating them from the elements. It might include early warning systems in places that didn’t have them so that residents have more time to prepare or flee.

Forecasting can also help farmers continue feeding their communities. Singh has worked with farmers in the Gambia and India to adapt farming practices to more unpredictable weather. When rains come late, for instance, farmers might turn to seeds that can grow in a shorter time span. And they turn to crops that retain more moisture in the soil. “Those kinds of things are happening, but what is needed now is money to scale up those options,” Singh says.

The money it will actually take to prepare developing nations for the consequences of climate change is between five to 10 times greater than the public finance that’s currently available, according to a United Nations report released earlier this month. And those costs are expected to balloon. The price tag for developing countries to adapt to climate change could reach 300 billion a year by the end of the decade, the UN report says. 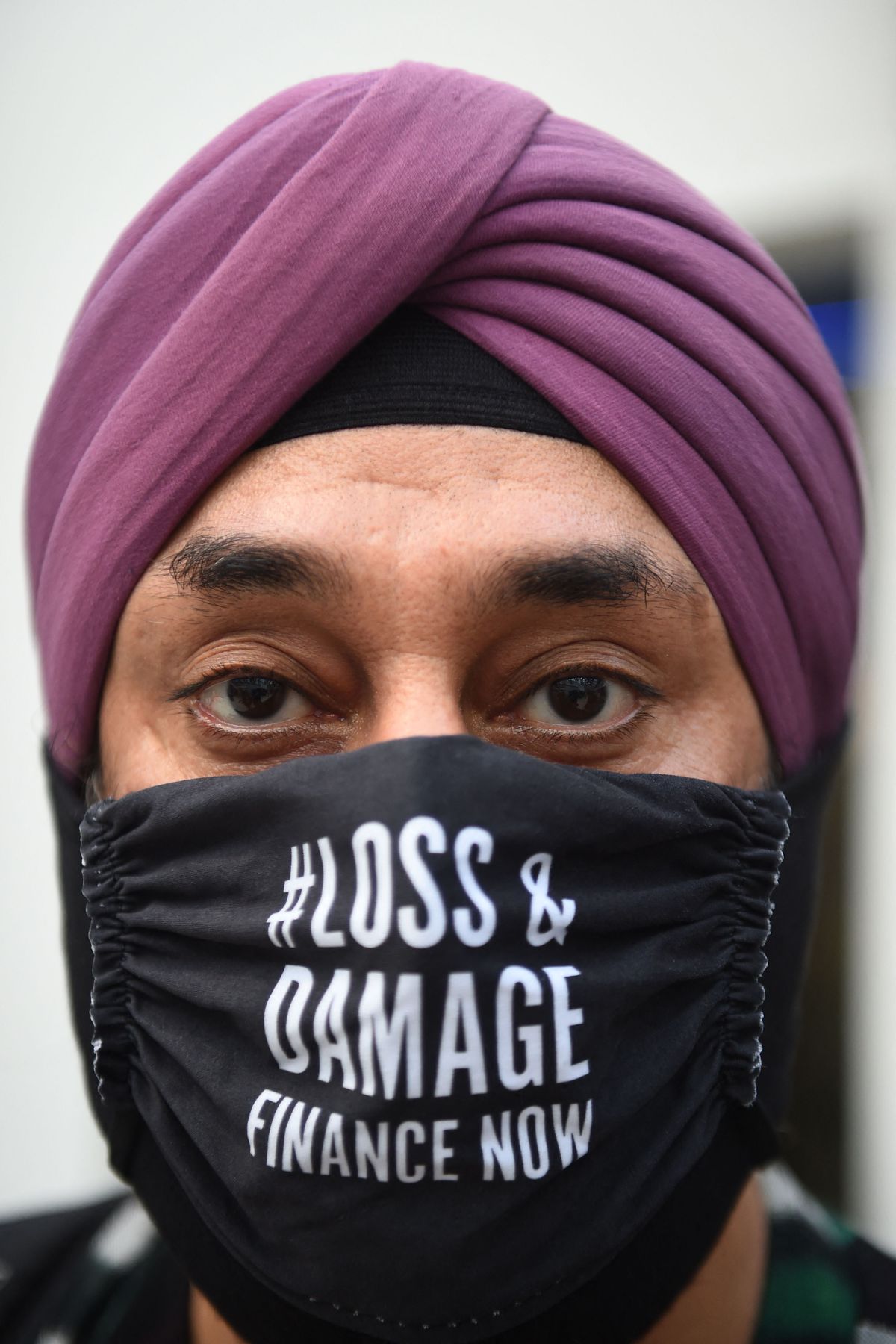 A climate activist wears a facemask with a #loss and damage message as he protests during the COP26 UN Climate Change Conference in Glasgow on November 12, 2021. Photo by ANDY BUCHANAN/AFP via Getty Images

Developing countries are paying for a problem that was passed onto them, for the most part, by wealthier nations. China’s currently the biggest climate polluter, followed by the US. But historically, the US has released almost twice as much carbon dioxide pollution as China since the start of the industrial revolution. Small developing nations on the front lines of climate change are responsible for a much smaller slice of emissions. On a per-capita basis in 2018, the average American was responsible for almost 10 times as much heat-trapping carbon dioxide emissions as a person living on a small island state in the Pacific.

“Quite clearly, the advanced economies in the global North are the ones who have caused most of what we are experiencing in terms of climate change,” says Henry Neufeldt, chief editor of the UN adaptation report. “Developing nations deserve to receive support.”

To make things worse, negotiators also fell short on another key goal in Glasgow. Countries’ plans to slash greenhouse gas pollution, so far, still aren’t good enough to keep global warming below 1.5 degrees Celsius, a threshold considered critical for staving off catastrophic climate impacts. To do that, global greenhouse gas emissions would need to drop nearly in half (compared to 2010 levels) by the end of the decade. Countries were expected to come to Glasgow with ramped-up plans to cut down their emissions. Counting all those up, global emissions are still expected to rise above 2010 levels this decade, albeit not as steeply as they would have without those new commitments.

That failure to cut emissions makes adaptation even harder. Considering current emissions reductions commitments, the world is heading towards a future where more than 70 percent of the world’s coastlines experience sea level rise greater than two-thirds of a foot. When seawater creeps onshore, it floods peoples’ homes — sometimes permanently. It contaminates sources of fresh drinking water. And it allows dangerous wave surges to do more damage to communities when cyclones hit. 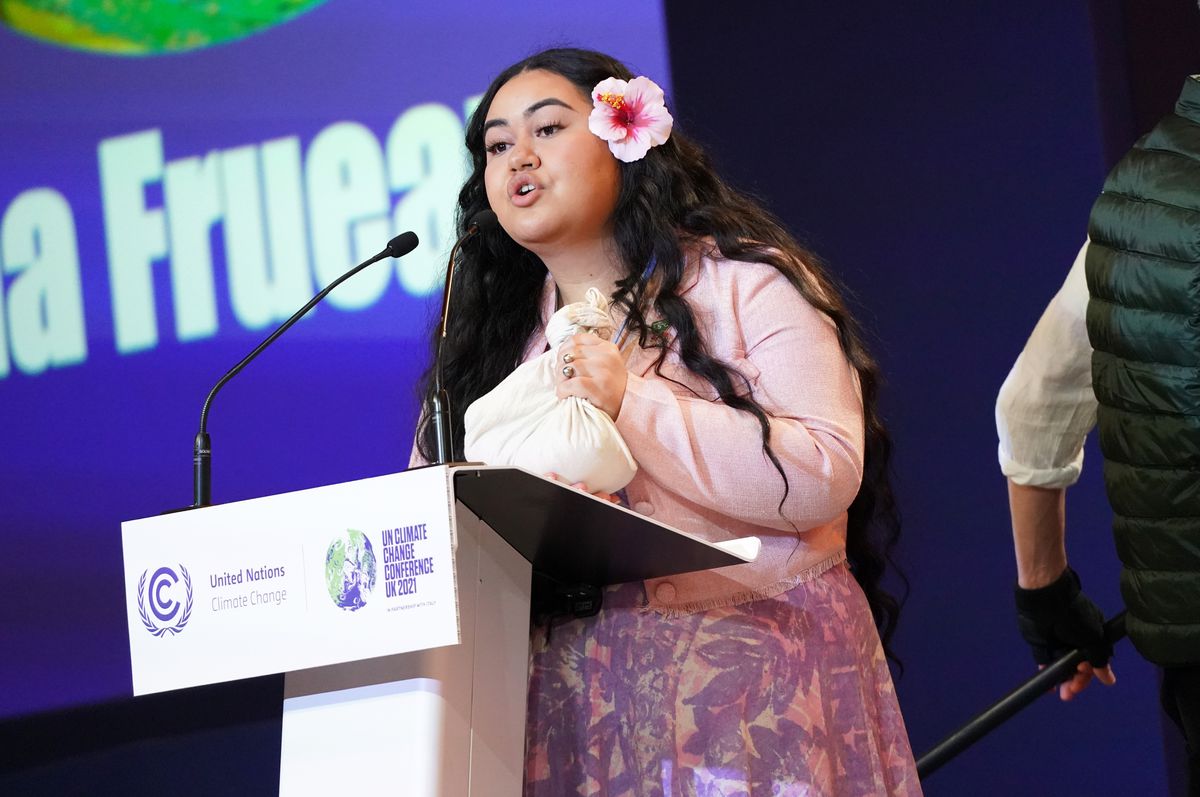 Brianna Fruean, a Samoan member of the Pacific Climate Warriors, holding a bag of seeds of hope delivered to COP26 by Syrian Puppet Little Amal during COP26 on November 9, 2021 in Glasgow, Scotland. Photo by Ian Forsyth/Getty Images

Samoa, a small island nation where 70 percent of the population lives within just 1 km of the coast, received an $8.7 million grant in 2012 from the Adaptation Fund to cope with some of those impacts. The initiative led to new seawalls to guard against encroaching water — as well as more roads to make it easier for people to evacuate inland when cyclones hit.

Still, there’s more work to do. Many of the initiatives’ targets were “too ambitious,” according to a 2018 evaluation report. An initial target was to build or improve 80 km (roughly 50 miles) of coastal roads, but the budget ended up only being enough for 30 km of roads at a cost of about $3 million. What’s more worrying is that those roads still face an uncertain future as climate change worsens storms, flooding, and coastal erosion. The roads will likely still need to be climate-proofed with updated construction standards, the report says.

The Samoa project also resulted in a “handbook” to guide potential relocation from hazard zones in the future. Being forced to abandon their homes is a worst-case climate scenario for many communities on small island nations that are losing land to the sea. They’ve pushed for finance for efforts to not only adapt but recoup losses from permanent climate damage. For those people who face the prospect of losing everything to climate-fueled disasters, Singh says, “it’s about the support to restart and rebuild my life.”

The Alliance of Small Island States at COP26 proposed creating a standalone process for financing “loss and damage.” That was ultimately removed from the decision text (although Scotland pledged independently to give £2 million). Formalizing funding for loss and damage is something that wealthy nations have shot down since the adoption of the landmark Paris climate agreement in 2015.