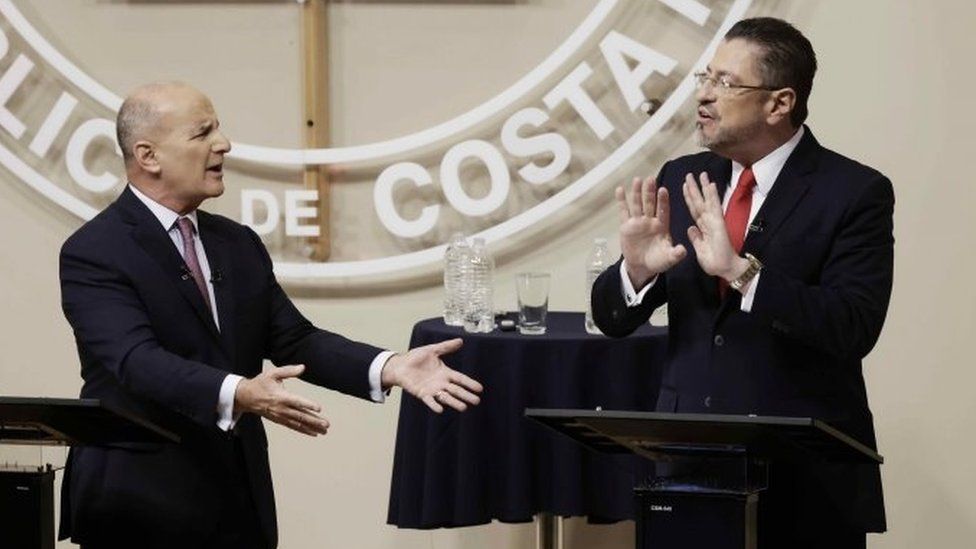 Costa Rica election: Will a newcomer beat an ex-president?

Costa Ricans are heading to the polls on Sunday to choose who will lead the Central American nation for the next four years. And as BBC Monitoring's Blaire Toedte reports, there are signs that voters may be a looking for a change from familiar politicians.

Following a first round in February in which none of the 25 candidates managed to gain the 40% of votes necessary to win outright, two men are left in the running.

Jose María Figueres, a 67-year-old centre-right former president from the country's best-known political family, was the winner of the first round.

But his rival, 60-year-old career economist and political outsider, Rodrigo Chaves, has overtaken him in recent polls.

Polls published on 29 March suggested between 41% to 45% of voters preferred Mr Chaves over ex-President Figueres, who was the first choice of 33% of those polled.

But with 15% of voters reportedly still undecided, the race could turn out to be tight.

Mr Chaves is a long-time World Bank official who served as Costa Rica's finance minister but who stepped down from the government post after only six months.

His second-place finish in the first round came as a surprise to many.

Rodrigo Chaves is seen as a political newcomer

But with concerns about the economy and political corruption high on voters' minds, many Costa Ricans seem to be leaning in favour of the economist, whose short time in government is seen as a plus by those fed up with traditional politics.

Standing for the Social Democratic Progress Party, Mr Chaves has been banking on his economic know-how, which he acquired during his nearly 27-year career as a professional economist for the World Bank.

However, his time at the World Bank ended under a cloud. He resigned in 2019 following complaints of sexual harassment which he has denied.

Mr Figueres on the other hand is an establishment politician. The son of a three-time former president José "Pepe" Figueres Ferrer, he is running for the mainstream National Liberation Party (PLN), which was founded by his father.

Mr Figueres was president once before and is a veteran politician

Mr Figueres has served as president once before, from 1994 to 1998, and has also been minister of foreign trade and agriculture.

But like his rival, a resignation from a previous job has also come back to haunt him in this campaign.

In 2004, he stepped down as CEO of the World Economic Forum following allegations in Costa Rica that he had influenced state contracts made with telecommunications multinational Alcatel.

Mr Figueres denied any wrongdoing, and in 2007 the investigation was closed.

Economic stability with a green agenda

Costa Rica, which has a reputation for political stability, is fighting hard to shake off the economic impact of the Covid-19 pandemic.

Not surprisingly therefore, both candidates have put economic policies at the centre of their campaigns, promising to increase economic growth, create jobs and reduce the fiscal deficit.

Calling himself a "pragmatist", Mr Chaves has emphasised the importance of "efficient, transparent public spending".

He favours a "hands-off" policy, arguing that the state has previously acted as an "obstacle" to economic growth. He also sees no need to raise taxes to solve Costa Rica's fiscal crisis.

Both candidates have also pledged to foster Costa Rica's world-renowned ecotourism industry and to pursue policies of adaptation to climate change.

Mr Figueres has said he considers the fight against climate change to be an "opportunity" for growth, through creating new business and employment models, a lower emission economy and resilient infrastructure.

He proposes a move towards bio-fuels for local consumption.

Mr Chaves has also advocated reducing carbon emissions, and replacing use of fossil fuels with bio-fuels, "if costs allow".

Costa Rica's biggest trade and tourism partner by far is the United States. And with both candidates having personal ties to the US - they both studied there - these strong links are likely to continue whoever wins on 3 April.

But with China's role as an important supplier to the Costa Rican economy growing, both Mr Chaves and Mr Figueres have said that they see opportunities for strengthening these economic links.

Mr Chaves has said that if he wins, he will emphasise the promotion of tourism coming from China while Mr Figueres said he would "recognise the importance of having a deeper relationship with China, without neglecting [Costa Rica's] friendship with the United States and Europe".

The outgoing Costa Rican government has strongly condemned the Russian attack on Ukraine and both candidates are expected to maintain this stance.

The US and other allies have expressed concern about the threats posed to small states like Costa Rica by international drug trafficking and related money laundering and corruption.

Costa Rica is a transit country for the illegal narcotics trade and has suffered its corrupting effects on business and political life.

To tackle crime and transhipments of drugs through Costa Rica, Mr Figueres proposes improving security coordination with foreign governments by sharing information with them.

Mr Chaves also promises tougher anti-drugs and security measures. "If you do not allow cocaine to leave Costa Rica, [the traffickers] will not bring cocaine" into the country, he argues.